Explore aviation history, physics, and engineering concepts related to flight: atmospheric conditions, aerodynamics, propulsion systems, aircraft structures, airplane performance analysis, stability and control, helicopter aerodynamics, and an introduction to airplane design. Apply these principle in a laboratory setting and participate in field trips, guest lectures, workshops, and contests. Prerequisites include a math score of 500 (if tested in 7th grade before March 2016 OR SAT Math 530 (if tested in seventh grade in march 2016 or later) OR ACT math 18. If tested in eighth grade, SAT math-570 OR ACT math-21. Completion of Algebra 1 is preferred but not required.

Aerospace engineering is probably one of the most rigorous courses you can take at the Academy level. Despite the course description saying Algebra 1 is not required, it lowkey kind of is. The course delves into very, VERY high level math and if you love planes, challenging yourself, or math, you'll love this class. the kids in Aerospace also tend to be very very fun kids to hang around, and are usually the meme kings/queens of TIP. Legendary takers of this course include a first year at Rollins term I 2017 who could literally solve every single high level math problem you through at him. he'll probably be the president of NASA someday.

A legendary class that coined many terms and started many traditions, like paying homage to the Danger Noodle that lives in the bushes outside of Bush science center, and playing ERS and throwing cards around at free time. The teacher was Fan Geng and the TA was Albert Quiroga who was constantly shipped with the Psych teacher, Jordan. This specific class of Aerospace Engineering was filled with the most meme-able kids on campus. Their shirt was purple and on the back consisted of a planet, a bunch of binary code, and Alberto holding the fun stick as represented by a caveman. 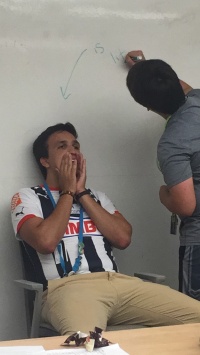