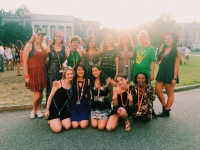 The Struggle Squad at the last dance.

Alex's Struggle Squad was a 4th year girl RAG group from East Term 1 2017. It was led by the infamous and adorable Alex O., a former East Term 2 TIPster and the unintentional(?) creator of the Old Glory Flag (Term 2 relic). The Struggle Squad was known for being abnormally relaxed, constantly ordering Heavenly Buffalos, and being the envy of the other 4th year girls for having the best RC. This RAG was the only fourth year girl RAG on the third floor of Alspaugh, while the others were all on the first floor. This was an advantage at times because this meant that the hallway was far calmer and had far more intimate hangouts instead of the massive cry sessions that typically took place in all of the other RAG's downstairs. The Struggle Squad did, however, struggle (how fitting) a lot with the RAG's of younger boys around them, and were always very confused when they heard Andrew's RAG chanting or yelling while they tried to have RAG meetings or when Nick's RAG was running around the halls and watching Rick and Morty at inconvenient times. Despite all of this weirdness, though, the Struggle Squad was pretty tight and had a lot of fun together. 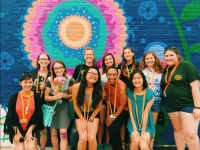 The Struggle Squad at the iconic flower wall on Ninth Street.

Emily Gurgens was originally supposed to be living on the first floor of Alspaugh with Tosca Langbert as a member of Nicole's RAG. However, when she arrived on move-in day, the staff couldn't find her key! After a few hours of kind of freaking out with a bunch of her fellow 4th year girls, Emily found out that her room was actually not able to be used because TIP didn't have the key to her room whatsoever. This was believed to be because her and Tosca's room was in the process of being prepared for gender nonconforming students. Because she couldn't use her room, Emily was moved into a room on Alex's hall with Geena Panzitta, which was great for all parties because Geena had wanted a roommate, Emily got an actual room, and the Struggle Squad got an extra member! 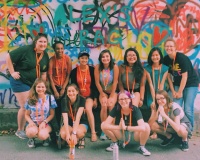 The Struggle Squad in Freedom Tunnel. It is worth noting that when Alex wrote "Alex's RAG" on the wall, she didn't notice the explicit word written directly above it, which has been cropped out of this picture. After noticing this several hours later, Alex groaned very loudly and exclaimed "we're the (insert the name of the male sex's reproductive organ here) RAG...," causing all nearby members of the Struggle Squad to die of laughter (including me as I write this ahahaha sweet memories)
Retrieved from "http://www.tipwiki.net/index.php?title=Alex%27s_Struggle_Squad&oldid=64439"