Andrew Tanaka was a 1st Year/4th Year at West Term 1 2013 and took Video Game Programming. He was part of the DUNC SQUAD. Andrew was a total ladies man and had a line of women always following him. jk. But seriously, there was Evelyn and Becca, etc. Andrew was known for his beautiful abs that he shamelessly showed to people and let Sophia Ly pet every time she saw him. Andrew also had a wonderful singing voice and one night just randomly sat in the middle of KP's hall singing all the ladies to sleep. Andrew was the owner of one of the solo rooms... what a loner. ;D He performed Blackbird by The Beatles with Clark Davis, Antony Samuel, and Reed Haury for the talent show. They all sang while Clark played his guitar. For the last dance, Andrew can-can-ed down the red carpet with Antony Samuel and Ryan Brandt. Clark Davis gave Andrew development rights to Shuffle Mania. 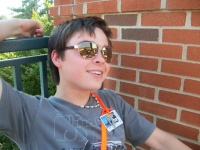