Eggy was an egg from 2nd term 2012 at Trinity. Eggy started out as an egg for the egg drop which was a mandatory fun activity, it was a miracle Eggy survived the egg drop after two horrific accidents. Eggy was preserved and raised in a refrigerator for half a day by Richard and Luke two first year Tipsters. Then Richard decided that Eggy deserves a little something more so he gets Breanne (an RC) to hardboil Eggy. Breanne carelessly left Eggy alone in the hot tub and he cracked. After a confirmation from the RCs that he was truly gone they preceded with a funeral in which they buried Eggy under a tree outside Prassel. Eggy will forever be in the hearts of those who had been touched by his courage and ability to overcome adversity. He currently rests in peace outside Prassel where he was buried. If Eggy's remains are ever to be stolen, fierce and aggressive jihad is to be declared upon the cats of Trinity and whomever else is suspected to be responsible for this unforgivable sacrilege. One of Eggy's legendary feats occurred when his guardians decided to throw him up the floors and his protective structure disintegrated and all fell to the floor the witnessing tipsters started to grieve upon the loss of Eggy when they realized that Richard had somehow caught the unprotected Eggy without realizing it, celebration followed. 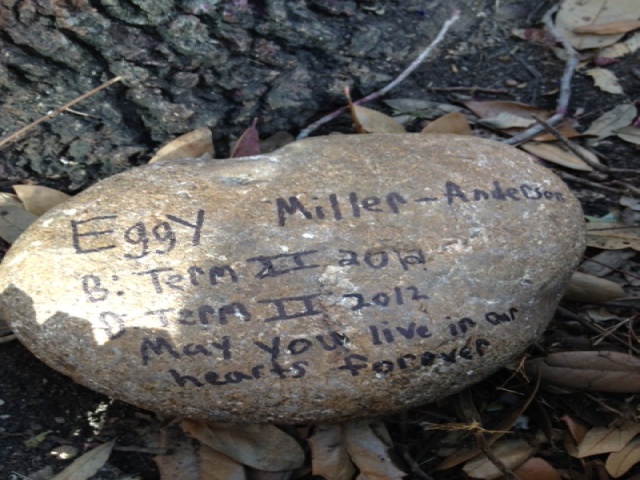