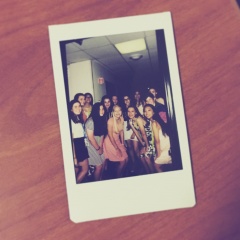 Ellison's RAG on their way to TIP Prom.

In the summer of 2016, Ellison Hersch came back to Duke East to become an RC after a legendary four years as a TIPster herself. At Term II, she was the proud (but was she really proud of us) leader of twelve girls on third floor Bassett, informally known as "Ellison's Elite Eight (Plus Four)."

Many of the Elite had relationTIPs whilst at TIP. Of course, some of them were within the RAG itself and a complete joke, but this information isn't that relevant.

If you have more ships, please add them.

On the first night during Icebreakers, Kate H. asked Ellison whether she had read the roommate request forms, to which she hesitated, narrowed her eyes, and said, "Yes. I know a lot about you right now." She turned her gaze to Sydney and added, "You too."

Kate grinned and said, "The demon thing was a joke." Sydney, shocked, said, "Wait a second - you put demonic rituals in your form too!?" After this information was confirmed, someone asked Ellison why the two of them weren't roommates due to their... similar tastes.

"I didn't want both of the demon kids in one room."

This was a reasonable response.

Contrary to popular belief, Kate and Sydney did not partake in any demonic rituals; in fact, they both put these activities in the section "What habits of a roommate would likely bother you?" Luckily, neither of their roommates summoned demons at their time at TIP (as far as we know).

Props to Ellison for making sure her girls were matched with suitable, non-demon-summoning roommates.

Note: Kate actually stated in her form that she was "okay with demon summoning, as long as it isn't too loud and doesn't keep me up at night."

-Ellison, enraged after a RAG member is late yet again

"You are a disgrace to the RAG! Go pack!"

-Ellison, enraged after a RAG member is caught slacking instead of packing

"It's one in the freaking morning; go to sleep!"

-Ellison, enraged after two RAG members are discovered chatting loudly in the bathroom (this is the TIPpropriate version of the quote)

"What if we had lukewarm gossip."

"Make way; I need to bleed on a new piece of cloth."

-Kate A., I don't know what the context of this quote was and I'm not sure if I want to know

-Kristy, on her life skills

"Just leave. No one wants you here, Hillary."

-Katrin, expressing her anger towards a past classmate

"Have you seen my roommate?"

-Kate H., first used on the first day, but later repeated on multiple occasions by both Kate and Ryley

"Are you BEE enough?"

-Sydney, Mina, and Kate, used as a greeting to one another

-Sydney, after Katrin boarded the bus for the airport

"16 million Jews in the world and you're my favorite one."

-Ellison, used often to express her feelings toward the Elite