The Neantrathals were a RAG of 14 2nd year boys who lived on the third floor of Bassett. 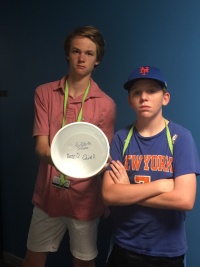 Reece and Quinn posing with the vanquished beast

Aaditya was probably one of the most well versed in politics people at TiP. Known for having very strong opinions about government and especially the presidential election, Aaditya was especially fun to hang around since you never knew what he was going to say next

Ben was the TiPster who was well rounded in various activities including, but not limited to, card collecting/cardistry, Rubik's Cubing, pen spinning, computer hacking, science, decorative knot tying, and speed reading among other things. He had a tendency to impulsively purchase things both at the store and online, and basically got deliveries regularly.

Boden was the person that brought the wonderful sound of "VROUN-ve" to TiP.

Colton was the super energetic yet chill guy in the RAG. In a relationTiP with Niamh.

Conlan knew a lot... about history.

Connor was the best foosball player in the RAG and possibly all of East (he might be better than Alex). At dances, he would go to the Brown commons and, with Savaan, demolish most competitors in his way (Seriously, he won 5-0 in a span of three minutes once).

Jacob was the one who was liked by many of the girls at TiP but was officially in a relationTiP with Eden.

John's superlative came from the night after the RAG demolished a Vermonster. After returning to Bassett, many fellow rag members found themselves regurgitating half-digested chocolate ice cream into the toilets... while John stood by and played music. In an unofficial relationTiP with AJ.

Kendall, with an iron stomach, drank the melted remains of the Vermonster after everyone else was too sick to attempt it.

Quinn had the look of the most innocent person on campus, but he would beat you down if you mentioned something about sports he didn't like. Best tipster.

Raymond knew a lot about movie ratings, and could almost flawlessly recite (to many people's annoyance) Rotten Tomato's ratings for every single movie brought up during Rag night planning. However, Raymond had a consistent habit of loosing his water bottle everywhere. He even left it in the water fountain after filling it up once. Raymond also had a tendency to be in the bathroom at the most inopportune times, most often before dinner, before RAG meetings, and before dances.

Reece was the super athletic kid and one of the only second years on Dream Team due to his enormous 6' 3" build. He was also good at pool and ERS.

Will would always be playing one tune or another in free-time, and you could usually find him strumming his guitar on the third floor.

During the first RAG night, the Neantrathals decided to watch Monty Python and the Holy grail over some takeout. Due to the nature of the food consumed and the subsequent inability of TiPsters to clean up after themselves, the Bassett third floor study was left smelling like grease for the next few weeks. No amount of open windows or fans could purge the smell from the room, but nevertheless, almost everyone would gather to talk with the girls from the rag across the hall.