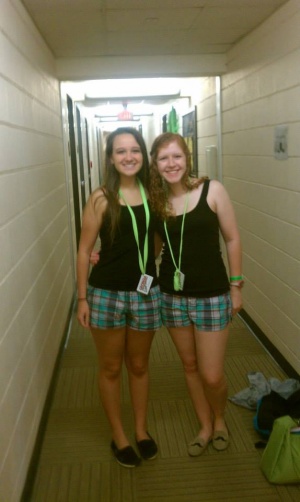 Emma and Margaret their third year of tip.

Margaret Elam, and Emma Rodriguez are going to be fourth years in the 2014 year of tip and were recently third years at UGA. Four all of their three years at tip they have been in the same class.

Emma and Margaret live twelve hours away from each other. Emma lives in Tampa, Florida while Margaret lives in Durham, North Carolina. They spend the year skyping and during their third year you almost never saw one without the other.

Their couple name is Emmet (hence the title) and they have been married for almost a year now. Whenever one of them gets a boyfriend (it's always Emma) the other (Margaret) changes their relationship status to "It's complicated". Despite the fact that they are both attractive, one gets way more action than the other. And by way more action I mean, that one half of Emmet (Margaret) has gotten zero action and the other half (Emma) gets all the action. Margaret says she likes to think that it comes out into a balance, but we all know she's just trying to pretend she isn't a bitter old woman on the inside.

Their third year of tip at UGA Emmet had a very eventful term. Mostly because Emma was kicked out a day early (a dark hairy mole on the flawless face of their friendship) and that in turn made Margaret very upset. Emma formed a relationtip with the tip moses of 2013 and various things (that were not tippropriate) happened and they were caught and kicked out. Neither of them were allowed to go to the third dance and Margaret had a very hard time without her best friend there while Emma was having a very hard time sitting in the office for many hours. Both halves of Emmet are to blame for the happenings but nonetheless they have overcome as these friendships do.

Margaret and Emma currently have four children: Jacquan, Shaniqua, Antavius and Abcde (Ab-say-dee). Jacquan and Shaniqua were both given birth on/for Margaret's fifteenth birthday while Antavius was adopted and Abcde was concieved sometime during tip and Margaret gave birth to that beautiful child at her cousins house.

As far as anybody knows, Emmet plans to be back for their fourth year and they plan to make it the best experience of their lives and of those around them and to be the best fourth years they can. They also have a strong dream to MC the talent show their fourth year at UGA and be the first Lady MCs for Term 1.