Ethics and the Little White Lie

One of the most requested classes of the term, this class was under a lot of pressure in its debut year at Duke TiP. It ended up being very fun and created a lot of fun memories. Anyone considering taking the class, just be ready for a lot of uncomfortable topics and to think a lot harder about issues you didn't think of before.

The Instructors: Originally taught by a woman named Jenni, the class was barely any fun in its beginning. Jenni was a local teacher who had a love for popcorn reading and expecting too much from the students. She mysteriously disappeared a week and a half into term, and it was suspected that the tipsters were the reason for her sudden departure. The new teacher, Emily, was a joy. She was also the instructor for term one that year, and it was a joy to have her. She took the class on field trips to an art museum and the Duke lemur center, automatically making her way better than Jenni. Overall, Emily was much better at teaching the subject in a fun way. The TA Bethany was known for her sarcasm and wit, often engaging in fun debates during the class's beloved "Agree-Disagree" games. Emily and Bethany were such a power duo and made the class into an interesting and fun one.

Subject Matter: Tipsters received 3 books upon their arrival. These were "Lying" by Sam Harris, "Justice" by Micheal J Sandel, and "Ethics in the Real World" by Peter Singer. The class covered Justice the most with Jenni, quickly read "Lying" with Emily, and read very little of "Ethics in the Real World". The book by Peter Singer was the favorite of the trio. The class covered topics in the books they read, often reading for long periods of time and discussing with Jenni. There were also many games of Agree-Disagree played. These games often turned into heated debates, but this was the class's favorite. The class took some notes from powerpoints with Emily and Bethany, but they were overall interesting. They also studied the Stanford Prison Experiment. The final project of the term was to research a topic and its ethics. Tipsters then gave a 7-minute power presentation on their chosen topics. 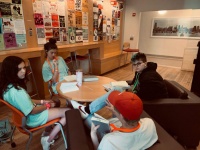 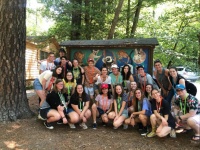 This is a picture of the class at the Duke Lemur Center with Emily and Bethany.
Retrieved from "http://www.tipwiki.net/index.php?title=Ethics_and_the_Little_White_Lie&oldid=79124"