From the archives of TiPWiki, the unofficial Duke TIP Wiki
Jump to: navigation, search
Fam 3 was the champion student team for TiP West Term 1 2017. It was arguably the most stacked team TiP has ever seen. 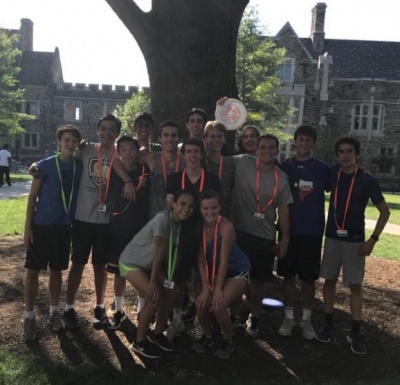 The team was based off of the original Fam 1 in 2015. Fam 1 was a primarily 3rd year team that lost to Black Magic in the final game of the tournament. Many of the members of Fam 1 returned as 4th years and continued the Fam tradition. After they recruited Creston Brooks and Wyatt Gildea, Fam 2 lost in the final game of the tournament to the third year team Creston Betrayed Us (CBU) consisting of members Alex Baker, Nicolas Sanchez, Brandon Robinson, Katie Tanner, and Simone Kwee. This year, Fam 3 entered the bracket with extra motivation to win.

The Start of Fam 3

The bracket consisted of four teams total: Fursbey, Game of Throws, Ultimate is not a Sport, and Fam 3. There was one mainly second year team, two mainly third year teams, and one fourth year team. The first round was Game of Throws vs Fam 3 and Fursbey vs Ultimate is not a Sport. The first rounds were on June 22nd and 23rd. The morning before the first game, Fam 3 made all of its members come to morning run to practice and discuss strategies. All members showed up except LUKE YIUM and MATHEW POTTER, who "overslept".

Upon returning back from the break, Tim told the students that the game would now be played to 11 instead of 15. This was upsetting for many people considering the staff now only needed three more points to win. Tim roasted the students, saying "If y'all were playing better, we wouldn't be that close to winning". The students, now even more mad, went even harder in the last half. Since Fam 3 was such a deep team of 14 handpicked players, they had been subbing in and out the entire game, but at this point they sent out a final lineup: Alex, Nicolas, Creston, Katie, Campbell, Rishab, Mathew/Sam (Sam subbed in for Mathew near the end).

Memories of the Game