Frank is the GOAT (except when he gives tests, then he's the WOAT)

Frank (Frankster) Kuo is an ultimate Frisbee legend, a sexy beast and he was a TA for the Engineering for Fun class at Rice University at Term 1 and Term 2. Frank is often called Frankster because the students are tipsters, so Frank is Frankster. It is the greatest title in all of TIP to be considered a Frankster. He goes to the University of Toronto and is the star of the ultimate Frisbee team. He plays Shell-Shock with his fellowsters during evening activities. Frankster was a TIPster back in his day. He gained fame during one of his terms by reading popsicle stick jokes during the talent show. He enjoys drinking TruMoo chocolate milk during dinner time. He also drinks 4 milks (2 chocolate and 2 2%)every single day at breakfast. He takes videos of people at the dance on Snapchat and flexes to his friends. Frank is also an amazing DJ and is highly recommended for all parties. He is an electrical engineer and will one day makes lots of money for his himself. He can hopefully one day build his own ultimate Frisbee stadium with all the money he makes. In his first 2 years of High School, Frank attended Durham School of the arts. He played on the Ultimate Frisbee Team, and that is where he developed his passion for the sport. Frank has done several incredible things in his life. He won the Spelling Bee in 5th grade. One of his greatest accomplishments is making up his High School graduation speech on the spot. He's currently single and ready to mingle (circa June 2018).

Frankster was born somewhere is Canada on October 28, 1998 and stayed there for roughly 2 months. Then, he moved to Shanghai, China when he was an infant and stayed there for 10 years. However, don't let this confuse you because Frank is Taiwanese. These are the characters for his name: 郭彥志. He then moved to Durham, North Carolina after his time in China. He spent most of his life in Durham and considers it his hometown. He has a little sister named Mia who is nine years old. They constantly roast each other, according to him. Frankster then probably went to middle school, passed, and moved onto high school. For the first 2 years of his high school life, he attended Durham School of the Arts. At the start of his Junior year, he switched to Woods Charter School. He then chose to attend the University of Toronto.

Frankster has adopted 7 children. Their names are Ethan Bull, Nathan Dummitt, Daniel Lee Gabriel Toro, David Shu (sub to ddshoo), Koen Lee, Michael Chung. Gabriel Toro and Daniel Lee are clearly his favorite children and Daniel is the greater GOAT. At the adoption center Frank took one look at Eric Yang and decided he was not worthy of being adopted. Eric then died of starvation after Frank did not adopt him. Frank has an 85 mph fastball and oh boy, do his beatings hurt.

Frankster's favorite music is sad music. He has been listening to it since the young age of 13. His favorite song is "In the arms of an angel" by Sarah McLachlan. Very sad. He also enjoys listening to reggae but sad music are Frankster's true jams. Frank has an 88 on the Rice Purity Test. Frank enjoys watching Wasted Vine Compilations in his free time and laughs at the kids. Frankster watches a lot of Netflix in his spare time. His favorite shows are Black Mirror and Blacklist. Frankster also enjoys watching videos like "Top 5 Most Insane Roller Coaster/ Water Slide Accidents". Frankster's favorite part is seeing people get hurt. But it's alright because Frankster is the GOAT. In Term 2 2018, Frank's Engineering for Fun kids continually asked him to adopt them. During evening studies, Frank would "adopt" either the winner or top two of each Kahoot! Frankster's phone is also restricted by his parents because he is too much of a beast.

Frankster started playing Ultimate Frisbee in 8th grade. He played his freshman and Sophomore year at Durham School of the arts. He played his Junior and Senior Year at Woods Charter School. He then went on fulfill his dream and play Ultimate Frisbee for the University of Toronto. He currently wears jersey #4 on the B team called the Torontulas. Frank enjoys playing Ultimate Frisbee with his students during the breaks. His favorite thing to do is to try to hit them in the head when they are not looking. He did this to Kush on June 21. Kush was not looking and Frankster nailed him right above the right eye. Frank really enjoyed watching Kush suffer. Kush probably deserved it. In term 2, Frank was hit by karma. Rohan (Term 2) tried throwing the frisbee really fast at Daniel. Daniel, with his ultra karate instincts, dodged it. The frisbee was still filled with Rohan's (Term 2) bloodlust and bonked Frank in the head. Frank seemed a little mad, but because Daniel was so pretty, he had to forgive him and Rohan (Term 2).

Frankster was once interviewed by a reporter about Canadian and American politics and what makes the University of Toronto appealing as a school. Later on in the interview, he was asked what he knows about the Canadian Prime Minister. He replied by saying “Well, he wears cool socks. I mean, literally—every time I look at the pictures, he wears cool socks.” To find the full interview, click this link- https://www.utoronto.ca/news/why-these-students-chose-u-t-over-us-schools

On the day Frank graduted from high school, Frankster forgot his speech at home. Frankster, being a legend, decided to come up with it on the spot. Click this link to watch his speech.- https://www.youtube.com/watch?v=RP8XE-DKCIc

One lunch, Frank went to the bathroom. His kids all ran away and hid from him. Frank came back and didn't care at all. He went around and sat with other tables until his kids reappeared several minutes later.

For the second dance of term 1, "Welcome to the Jungle," Frank was mobbed by a small group of his followsters T-posing. He could not cope with the amount of dominance and was enclosed by the mob. He broke free only after the mob dispersed.

Frank loves his children dearly but sometimes math fails him and he forgets children. Then Ryan has to bring the missing children to the room while Frank frantically searches the building. In the end, everyone finds their way safely.

Frank has chugged a gallon of milk before, according to him.

David Shu was messing around at lunch. He told Frank and many other people to stop looking at his d*** (David did not actually have it out. Thank God.). Frank being the god-like human being he is, had to step in. Frank said, "There's nothing to look at, David.". The world exploded and Frank was crowned as the next God.

Losing to his son Koen 6-7 in air hockey

Frank served as the head judge for the 2018 Term 1 Rice University TIPsync competition. He was the most honest and popular of the judges and he didn't shy away from criticizing teams in order to help them improve. He also served as a prop in Chris's RAG's performance of Umbrella and he was part of the conga line that occurred during Fernando's RAG's performance of We're All In This Together.

At Rice's 2018 term 2 TIPsync, Frank was the host, leading the other 4 judges. At this same TIPsync, Frank tried to get himself attacked by Justin Bieber. Frank...I swear.

What is love life?

On June 28, 2018, Frank asked Katie Whitson to TIProm during breakfast. The majority of the class was there because they had been waiting for 24 hours for this to happen. Some dedicated members of the Engineering for Fun class even stayed in the 2D staircase until 10:30 to wait for Katie to arrive. She never came. Frank said that he should have asked her at 11 pm when all the children were "sleeping". But he's not that evil so he decided to do it in the morning. Those dedicated members met once again at 7:55 am and walked to breakfast together. Great bonding. No one ate anything until Frank asked Katie. When Katie arrived, all the children lined up like in those real proposals but this one was just for Prom. Katie and Frank hugged it out and made a <3 with their hands. 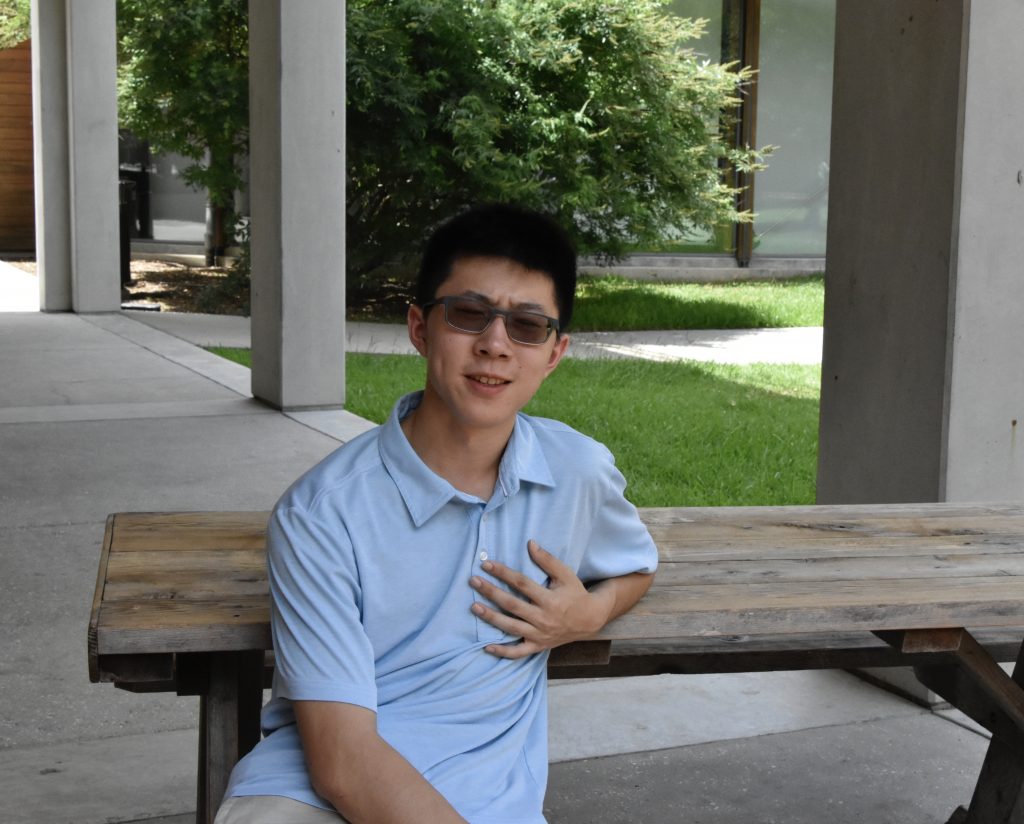