Gordon Glass ("Vinny", "the TiPtator") was a past tipster and one of the original fourth years in UGA. Apparently he's really good at frisbee and was TiP king (like whaaaat?). Gordon recently taught the 2015 UGA Term 1 Mock (Real) Trial Class. The first thing you will notice about him is his perfectly slicked back hair; a lot has changed since his TiP days. On the first week of class, I'm pretty sure his kids disliked him. Don't let his scary demeanor fool you like it did them. He is a intimidating genius guy on the outside, but on the inside he's a real softie. He also has a thing for really bad jokes (made by Asa Guydo). He's really good at being smart. (he also acts like a dad but thinks its weird how we look up to him) (I admit we're kinda creepy though)

At some point in your life as a TiPster, you will end up shipping your teacher and TA, just like this Mock Trial class did. This time, though, they actually went along with it. On the wonderful day of our first trial, Ms. Kassidy Spayd brought her gigantic diamond-ring-bracelet thing (don't ask) for Mr. Jacob Dowell to 'prompose' to Mr.Glass. Mr. Glass, however, took the bracelet ring that Mr. Dowell gave to him and actually fake proposed to Ms.Cotton. It was every TiPster's dream. They aren't actually dating though (Gotton forever) 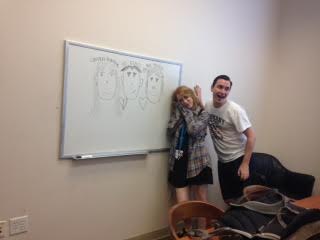 is the most effective way to get on Gordon Glass's (Vinny the TiPtator) nerves. It is also a great way to get yelled at by a bus driver. During Term 1 at [UGA] 2015 the Criminal Law and Mock Trial Class continuously jaywalked along with their TA, Jennifer Cotton, everyday to class. It got so bad one day that all the kids almost got run over by a bus. Ms. Cotton ended up even getting scolded by the bus driver that almost ran the class over.

"What do you think you're doing. Are you responsible for these children?!!!! Well you are teaching them real good manners...." -the mean bus driver who yelled at Ms. Cotton

He REALLY likes knock knock jokes. Tell him as many as possible every day. He is also a HUGE Metallica fan. He knows German but wouldn't yell at us in it even when we asked.