Hacky sack dude (aka Douglas Marks) has grown somewhat famous among Duke TiP due obviously to his skills at hacky sack.

His first year at Duke TiP, which was 2005 Davidson Term II, he forgot his hacky sack at home, causing him to acquire no fame.

The next year, however, he brought his hacky sack and was known for it. During 2006 Davidson Term II, only a few days into the term he performed a whopping uninterrupted 495 kick streak in front of some fellow Philosophy classmates and others who were also at break. This record remained unbroken until TiP Term II 2008 with 805 kicks. During that term, he also perfected his ever popular "head stall." Although he did not get a coveted talent show spot during his second year, he still performed because Jeff Y, his RC, was one of the talent show speakers and invited him to come up and "hack" while they prepared for the next act.

This was Hacky Sack Dude's most famous showing thus far at Duke TiP. Already popular from performance at Davidson the previous year, his following grew likely due to the fact that East had a greater TIPster population. He impressed students and RCs with his skills, constantly performing the head stall for which he is most famous. This year he did earn himself a spot in the talent show. He hacked to the song "Constant Motion" by Dream Theater. Unfortunately, due to time constraints and a slight iPod malfunction, he was forced to end his performance with a head stall at only about 217(the exact number is unknown due to possible miscounting by the audience).

2008 was Hacky Sack Dude's fourth and final year at Duke TiP. During first week he wowed his Screenwriting class with an unbelievable 805 kicks, as aforementioned. Shortly thereafter, he lost his original hacky sack and was forced to used his new one (which he always keeps just in case). However, having just hit a new record and hating the newness of this sack, Hacky Sack Dude was less interested in continuing his career. After attending the mandatory fun activity Crocheting for Dudes, Hacky Sack Dude found a new hobby which he spent most of the remainder of the term working on, completing a crocheted headband on the last day. 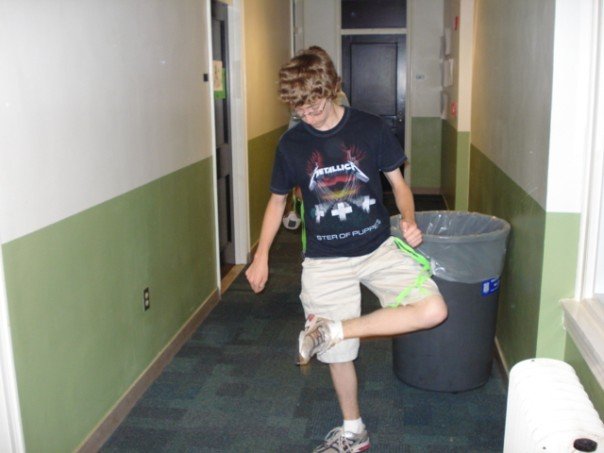