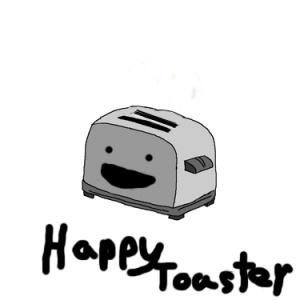 On this shirt was a drawn man with three slots in his head chasing another drawn man. Bryan said it was supposed to be about disease or something. But Caleb and his roommate / partner in crime Eshan didn't care. The guy looked like he had toaster slots in his head. So one day, while Bryan was out and about, Caleb took his trusty dry erase marker and began drawing a happy toaster on Bryan's dry erase board.

Although Bryan was never fond of being referred to himself as a Happy Toaster in front of his colleagues, the name stuck, and soon after the entire male population of the 6th floor in White Hall was calling Bryan a Happy Toaster.