(NOTE: We are aware of Hiawatha Democratic Dictatorship, but Hiawatha is its proper name) 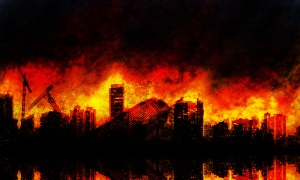 This is pretty much how Hiawatha would've turned out

In Term Two of 2014 at Wake Forest, the Mock Trial class was given the assignment to create a country on the first day. Three groups were to create a semi-functional government and its Bill of Rights, and all but one succeeded in doing so. This one group, composed of Mr. Phillips, Ms. Johri, Mr. Lake, Ms. Tawasha, Mr. Tate, and Ms. Hill, created Hiawatha (unknowingly naming it after an Iroquois leader), which was forever the punchline of many a joke.

However much of a mess Hiawatha ended up being, its initial stages were far more messy than the end result. At the beginning, Mr. Lake proposed a resolution for a puppet government run by a secret oligarchy of three ministers. This was initially passed, and an entirely undemocratic, most likely corrupt system of government was created. Somewhere around this time, Mr. Phillips procured "Hiawatha," a name that will live in infamy. However, the group soon realized this system would not work. So, they began to work on a total overhaul of the constitution. Three branches were established, similar to the United States government, but with more power skewed towards the legislative branch. The only branch that was substantially different was the executive branch, which was instead composed of five democratically elected leaders. They intended to create 16 sectors that would function as states, but this to would go horribly wrong.

The Bill of Rights

Soon, the creators of Hiawatha began to work on their Bill of Rights, with suggestion being thrown out left and right. Due to thi chaos, several...strange...amendments made it into the Bill of Rights, which we will address later.

Half of the amendments in the Hiawatha bill of rights are highly objectionable, and are prominently displayed on the back of the Mock Trial Term Two T-Shirt. If you do not have said shirt on hand, they are as follows:

There was the original intent for there to be 16 sectors in Hiawatha. However, when questioned on the number of sectors, a member of the group responded that there were sixty five, which completely ruined the bicameral legislature. Furthermore, it was answered that the sectors had no administrative powers.

What we have is a case of an overly centralized government, that is essentially a dictatorship under the guise of democracy. The country was a complete failure.

Gordon Glass, the teacher, called it the worst project he'd ever seen, and made jokes about it for the remainder of the term. The Flippen never commented on the actual project, but was seen making and laughing at the Hiawatha jokes. The students, on the other hand, loved Hiawatha. It became the premier inside joke of the Mock Trial class, with references to "humane and just" and "strong and efficient" constantly being made. At some point, it was nicknamed "The Democratic Dictatorship of Hiawatha," a name which stuck, and fit quite well. Hiawatha was also used as a blessing and a motivator. "Hiawatha is with you" became coined as a phrase and during the slide show, Hiawatha was screamed when Mock Trial appeared. Many chants have been used with Hiawatha, but one has yet to stick.