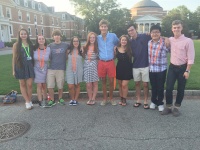 Tipsters are an emotionally and physically dependent group of people by definition, but these 11 take it to a new level. Actual relationship statuses in the group are unknown — they are rumored to be a large polyamorous relationship (this was confirmed by members of the group). It has also been speculated that they were all attempting to become one giant human; this is unconfirmed but likely. While the activities of the Huggy Group were largely mysterious, their favorite pastimes included handholding, professing their love for each other, and discussing dicks. Their public displays of affection were seen from all corners of campus — most commonly they were sighted at the Here after breakfast and lunch, the There after dinner (due to sun on the Here), and in the Enclave (the This) in all other free time. On special occasions, the Huggy Group would convene on the That. If a member of the Huggy Group was seen not holding at least one other member's hand, they were most likely on their way to meet up with the rest of the group or in class. This was a very rare occurrence. The Huggy Group hopes to one day be abducted by Tom, a giant alien who is worshipped within the group, and his friends. They desire to not only leave this terrible planet but also share their intense love throughout the Milky Way and beyond.

Speaking like Laura and hearing her voice in their heads

Napping in the middle of hallways

Taking over the world

Getting our faces kissed by Laura

Survived past birth with a crippling hydrogen allergy

Did not fall over during tipsync

Had the foresight to bring their own blunket

Deepthroated both bananas and hot dogs

Laura "Kisses" McDowell- fights the bourgeoisie, one capitalistic meme machine at a time

Michael "Bigfoot" Carter- is not, in fact, a stoner

Cody "Daddy" Meng- can break your heart with a single look