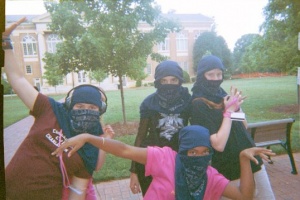 A Group of some of the original Iraqi Ninja Bever Sharks, including Girl Luke (Melissa), Stephanie LaRue, Rachel Watson, and Alexis Cheney.

The Iraqi Ninja Beaversharks come from an inside joke from the Myths and Legends class at Davidson Term II, 2004.

The class was discussing camp myths and Luke Chizek told the story from his Boy Scout camp about the beaversharks. The beaversharks are a beaver and prehistoric shark hybrid that resulted from beavers in Lake Toccoa(the camp's lake) eating shark eggs that had been buried there for thousands of years.

The Iraqi Ninja Beaversharks were created when the Instructor taught the class how to make ninja masks...

...and they went off and terrorized other classes.