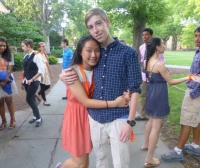 Fourth-year Jessica with Reed
Jessica Chow (AKA Jessie, Ica Ow...) is one of the most awesome, friendly, and outgoing people one will meet at Duke TIP. She attended TIP for three years, in which she made many friends and memories. She was a third year fourth year.

Jessica attended West Term I where she took Neuroscience! She was in Sam's RC group (the soul whales). She and Maggie Steiner had met and Trinity the year before and became really close at West. They choreographed a ballet dance to "A Thousand Years" by Christina Perry for the Talent Show. Jessica had a great affinity for lemon poppyseed muffins. :)

During her third year, Jessica started a dance called the jetpack. How it worked was that you would get yourself in like a rollercoaster and move from side to side. It was used frequently her fourth year as well in her dance groups. (Alyson now uses it every time the song Radioactive comes on and it gets to the part where it says "all systems go")

Jessica attended West Term I again for her fourth year! She was once again in Sam's RC group and took Nuclear Science. She performed "Goodnight Moon" by Go Radio with Mary Clarke Worthington, Bret Morrison, Margaret Sands, Joanna Sands, and Amanda Taylor at the Talent Show.

She also had an adorable relationTIP with Reed.

Also she and Alyson Win ended up becoming super close that year. They met third year and were friends but weren't THAT close. Jessica was also part of the Asian Squad which consisted of Alyson Win, , Jessica (Obviously), Carolyn Imm, and Huixi Yu. Alyson loves Jessica and the Asian Squad with all her heart and is devastated none of them can come back next year.

Since Jessica is so Asian, when she smiled, she would widen her eyes so that they would be really big. Since none of us other Asians would do that, we coined it the Jessica smile which became really popular among the Asians at TiP. In the group picture of the Asian squad Carolyn is seen practicing her Jessica Smile. 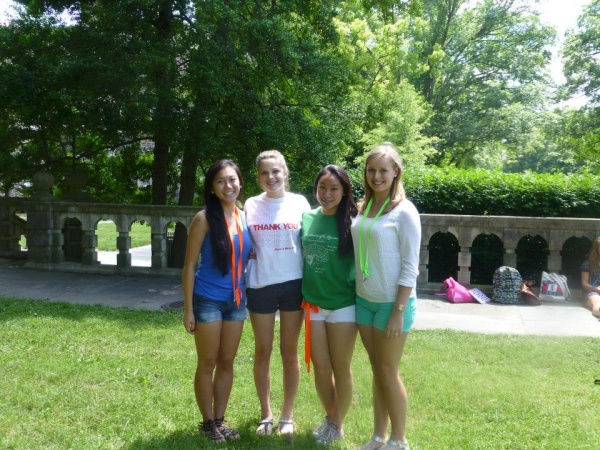 Jessica with , Hannah Boozalis, and Maggie Steiner her fourth year at Duke West