Joanna Sands was a 4th Year/4th Year TiPster. Her 1st Year was at Davidson Term 1 2010 and she took Cryptology. For her 2nd Year, she attend West for Term 1 2011 and was in Robotics. Her 3rd Year consisted of Electrical Engineering at West Term 1 2012. And for her 4th Year, she took Psychology of Decision making at West Term 1 2013. Her and her sister, Margaret, were very well known, known as "the Twins." Joanna was easily amused and her laugh is quite infectious. To tell the twins apart, Joanna was the one who wore contacts and was relatively taller than her sister. The Twins had the superpower of talking in unison...which amazed people...then slightly frightened them.

Joanna, also known as Jacob, was the only female in her Robotics class. Her nickname is Bobo, because she tried wearing a panda hat and with the black eyeliner, she ended up with a distinct panda-ness. She's the winner of the dumbly dumb competition which makes the runner up sad as she won by a LARGE margin. For Quadfest, Joanna was on the Green Team... who sadly got last. She participated in Jello Snarfle, Dizzy Bat, and Pudding Feed. Her team received third place in Jello Snarfle. Then, her team did really really badly in Dizzy Bat, but as the tough kid she is, she spun around that bat with all her might and power... but then ran behind a tree and puked... and she was then switched out of Pudding Feed. Also, Joanna loved the Jer-Bears.

Joanna had another fantastic year at TiP. She loved Electrical Engineering. This year, the class was at its best.

Joanna was one of the most awesome 4th years out there. She was part of KP's RAG. Everyone loved Joanna. She was always smiling and laughing. She was reunited for one last year of TiP with 4-year friends such as Mary Clarke Worthington and Amanda Taylor. Patrick Tarrant's younger brother Adam Tarrant attending TiP this year and Joanna thought he was a perfect child. Joanna was part of the Red Team for Quadfest. She was one of the Co-Captains along with Elena Hill and Amanda Taylor. Sophia Ly was her Captain's Assistant. She participated in Jello Snarfle, Pudding Feed, and Day at TiP. She and Amanda were Pudding Feed experts. They were the first to finish; however, the winner was determined by which whole team was finished first. Joanna was also part of the talent show. She performed Goodnight Moon with Mary Clarke Worthington, Jessica Chow Mein, Margaret Sands, Amanda Taylor, and Bret Morrison. She was the Mother in the original Doctor, Doctor skit. For one of her RAG's RC nights, they went to Qwheels. While everyone was go-karting...instead of joining, Joanna, Margaret, Audrey, Elena, and Tori sat inside for pizza. For another RC night, her RAG went to Ninth Street. Joanna, Amanda Taylor, Margaret Sands, Sophia Ly, Faith Rodriguez, and Carolyn Im all went to Whole Foods. They scarfed down pizza and gelato. However, they got thirsty and craved some soda. But, since it was Whole Foods, the average soda wasn't sold there. Her and her amigas settled on purchasing Whole Foods' off-brand Dr. Pepper. The only ingredients were carbonated water, cane sugar, and acid. It was the grossest drink known to mankind. It was then nicknamed "Acid." For the TiPSync, her RAG performed Be Our Guest from the Disney Movie Beauty and the Beast. During the performance, Joanna dropped the menu and made everyone laugh. Joanna was known as being a mom, with her motherly attitude and loving care for everyone's safety. However, she once threatened to kill all of her classmates' future children. 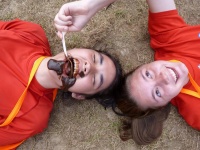 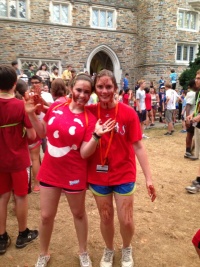 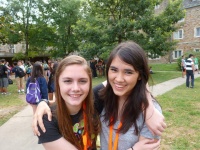