Josh Elkin was a 2nd Year/4th Year. He attended Texas A&M Term 2 2012 and took Modern Medicine. Then in 2013, Josh went to West Term 1 and was in Forensic Science. Josh is the most amazing, premium, craziest, most awesome, coolest, most incredible, sweetest, kindest, most loyal, and most thoughtful person to ever attend TiP. He is one of the best people to just sit and talk to. Many people remember him by his big, gorgeous eyes.

This was Josh's first year ever at TiP. He was a 1st Year/3rd Year. His roommate was Logan Campbell. His best friends were Michael Kovasala and Trevor Jones. And his bestest bestest friend was Tapan Patel. There was even some relationTiP drama. Because Josh is a total ladies man. ;D This was the year that Josh fell in love with TiP. Even today, he keeps in touch with the many friends he made at Texas A&M.

Everyone knew Josh. Josh was friends with almost everyone. And many people could just recognize him by his extreme tallness. His roommate was Nathan Rowe and they were in Kyle's RC group. Josh loved Forensic Science. On the last week, Forensic Science and Forensic Anthropology teamed up and participated in a mock crime scene. For pretty much the entire project, Josh walked around wrapping all of Kilgo Quad in police tape with Sophia Ly. This was the year Josh partied and partied and partied. Also,.....roof. ;)He loved hanging out with his friends. You could always see him with some of his closest bros, including Cole Thompson and Daniel Palladino. But we can't forget Josh's very bestest friend Autumn Hinze. Josh could even make friends at the very end of camp, like Katherine Bishara and Sophia Ly. Josh was also a member of the famous Dream Team student ultimate team, who miraculously won against the staff team. Josh knew how to talk to the ladies. He had more relationTiP drama, which included Keely Meloche for the first week of the term and Ellie Pippas towards the end. For the last dance....and after some complications, Josh escorted Ellie Pippas down the red carpet for the last dance. They were one of the cutest and most perfect couples there. On the last night, Josh spent lots of time and effort signing everyone's termbooks, especially Ellie's. He literally took almost an hour, writing her the sweetest and most wonderful note he could possible think of.

Josh was the self-proclaimed Junior Teaching Assistant (JTA) for Forensic Science. Whenever he told everyone what to do, as he often did, they would almost always do it. One day, he was annoyed with all of his classmates and instructed them to play the quiet game all the way through the building; no one questioned him. He was adored by all of his classmates and everyone respected his authority. Josh, along with his very bestest friend Autumn Hinze, distracted the whole class with sing-alongs. The song selections almost always included Taylor Swift. These sing-alongs annoyed Jenna and Rachel, the instructors, but nothing could stop them. Nothing. He ensured that nothing ever got done in evening study and that Autumn never got anything done. As it turned out, Autumn was keeping Josh from doing work (with PlayDoh) and Autumn never did anything anyway. Josh was often on the receiving end of cuddles from the Tori Monster and crisp high fives from the infamous Justin Baker. Josh could persuade people to do whatever he wanted, so he ended up with plenty of Swirly Gummy Bears during breaks. He enjoyed these bears while either playing Frisbee or tile surfing. Josh started tile surfing after finding several loose tiles next to the area where Forensic Science took their breaks. Tile surfing occurs when one balances on these frighteningly loose tiles, appearing to surf. On Cross Dress Day, the class visited the Nasher Museum. While the woman giving the tour was talking, she mentioned how the snake in the work of "art" (none of the things in that museum were really art according to Josh) could be a symbol of Satan. At this point Josh raised his hand and said, "I'm not trying to say that you're wrong, but..." and continued to tell the woman how wrong she was and why. Josh was also amazingly good at staring contests. He was the defense attorney in the class' mock trial against Autumn as the prosecutor. Josh's spirit animal was Raymond (or Rayman as he was called). On the last day, he made people cry just by singing "22" by Taylor Swift. Without Josh, Forensic Science would have been basic.

During evening study, Josh could be found sitting next to Autumn against the seating arrangement. Once when this happened they were playing a game on the back of an empty Dots box. It was a very intense, competitive game. Playing this game resulted in them both getting lame ways to die because they refused to participate in the class discussion. One time, when Autumn wasn't looking, Josh added another line when he wasn't supposed to. This completely changed the course of the game and Josh ended up winning by like 7000 points. He later confessed to cheating and Autumn forgave him.

While at the Nasher Museum, there was an activity where one partner had their back to a piece of art and their partner described the art to them and had them draw it. Josh partnered with Autumn for this endeavor. The first time they did this exercise, Josh described the art and Autumn drew it. This particular painting depicted a man standing with his shirt pulled open showing a symbol similar to Superman's. He had on sunglasses and was standing sideways. The most interesting part of the painting, however, was the words "Ain't Nuthin' but a Sandwich" on the top of it. They made a remarkable team together, possibly the best team of all, which is why they were bestest friends. The second time, Autumn described the sculpture of baby Jesus to Josh. It ended up... interestingly. It's the effort that counts, though.

In Forensic Science, each person had to choose a topic and do a presentation on it. Josh's topic was the forgery of Adolf Hitler's diary. While everyone else did Powerpoints, Josh refused. He instead got up and started tellng us the story of the forger and how they caught him. He ended by saying, "the moral of the story is, if you're going to break the law, you might as well be smart about it." Everyone in Forensics agreed that this is a moral to live by.

The last day of class, Jacey (or Jason) brought in her puppet. This was no ordinary puppet, though. This was in the form of a tree that had a face and there were mushrooms involved. Jason bought this for $40 completely on impulse and it grew to be a member of the class. His name was Garfunkel. Although everyone used Garfunkel, Josh was by far the best Garfunkeler. He made him attack innocent bystanders and other shenanigans such as that.

Overall, Josh had an unforgettable experience at TiP. He made so many new friends and a million more amazing memories. Josh was one of the greatest TiPster to ever live on the planet. And just meeting Josh was the chance of a lifetime. TiP would not have ever been the same without him. :)

One of the most amazing guys at TiP

So many new friends and experiences

Had the best time of his life 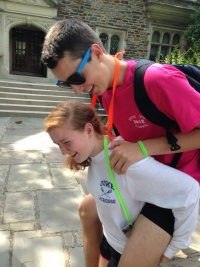 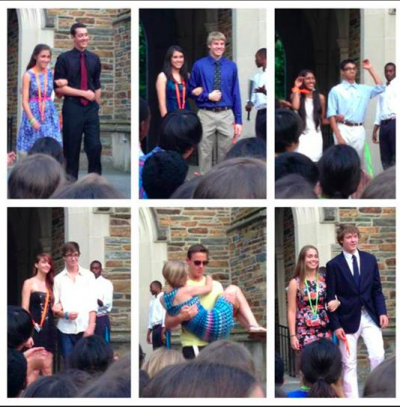