Oghkhay kids. Let's get down to business. A first year course, taught by former TA Clayton, and TAd by Daniel, little could have been expected. The students staged subtle rebellions, such as everyone standing whenever the teacher said "up", turning off the power, and saluting the teacher on the way into class. Mr. Bojangles is a vampire goatfish, and apparently also the class mascot. Tess Shaler was the most famous member of the class, and got sent home early. 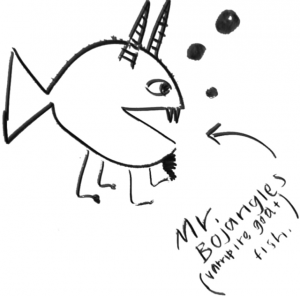 Documents from the class

Top ten ways to know your name is Clayton Critcher:

If you get called on and wern’t paying attention:

Answer the question in the following format, adjusted for one of the concepts: “I think that it can be best associated with the concept of Naive Realism”