During Term II at Duke East 2016, Jo Croft, also known as Kazü Mom bought kazüs for the entire Bach to Rock Class at the request of Ben Wise. What followed was the formation of the band, Yüng Kazü and the 10 Kazülez. The Kazülez resemble the 10 commandments and should be followed without question. If any Kazülez are broken, consequences are enforced. Consequences include: hate, shame, or in a worse case scenario, getting your kaz taken away. Media:Example.ogg 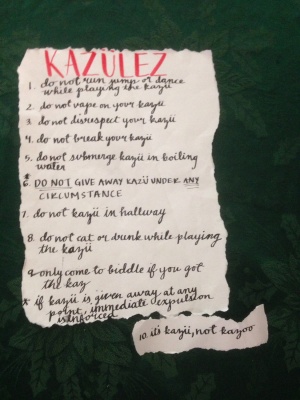 After the formation of Yüng Kazü, Ben Wise and Jo Croft emerged as the Kazü Dad and Mom, respectively. Along with their title, they own gold and red/black kazüs which are passed on to the two most passionate kazü players. Their job is to spread the llove of music in all forms and the ability to do what you want atvtip and not have to care about what other people think. Note that the titles are both gender neutral and can be interchanged.

Past and Present Kazü Parents