Margaret Sands was a 4th Year/4th Year. Her and her sister Joanna were the famous twins during each term. Margaret is known for her odd fear of chickens....and she really really really wants a tractor. She has the magical ability to look super derpy in front of a camera. However, her derpiness is amazingly cute in every photo. Everyone loved Margaret for her cuteness. Margaret is also known for being on Grellow at quadfest the whole time she was at West. 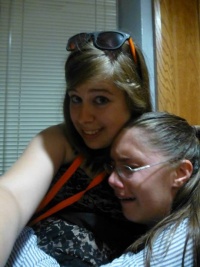 Margaret took Abnormal Psychology at West Term 1 2013 and was in Sam's RAG(her roommate was the amazing artist Faith Maxwell). She was the one responsible for introducing the class to Nikola Tesla's love of pigeons. For the last dance (the Sadie Hawkins Dance), Margaret courageously asked Clark Davis to escort her down the red carpet. This made Clark smile for hours upon hours. However, she became sick during the dance and her sister, as the mommy she is, took care of her. Margaret was famous for getting hit by many many many frisbees. She also looked super cute when she cried. She was also the only repeat female member of the second place frisbee team Black Magic and the co-owner of their extra hat(which she is extremely protective of).

Through out their 3rd and 4th years, Margaret and her ex-roommate Mary Clarke Worthington had a page posted of the wall inside of/next to their rooms called New Nuggets of Knowledge where they would write strange facts that they thought the other wouldn't know. These facts ranged from military terms to the number of gene sequences a fruit fly has.