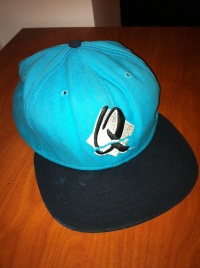 One of the Original Queef Hats (Andrew Lee's)

The coolest group of 3rd years at East Term 1, 2011. At the Durham Bulls game they all bought matching hats with a "Q" on it. Originally, Chris Drawdy had pointed out the hats. Andrew Lee then remarked about how sick of an idea it would be to get matching hats. Thus the Holy Trifecta that is Chris Drawdy, Jack Warman and Andrew Lee walked out of the store as the founders of the Quess Crew. The name was created by the lady who ran the all mighty Funnel Cake stand. As the boys walked by she quizzically stared at the sexiness of the turquoise hats. She later proposed to create a name. At the end of the game, the boys walked pass the stand again. Thus the name of Quess Crew (maybe its just a butchered version of Quest Crew) was created. Later in the stands RC Sarah Bumgarner, RC Steve Wazny and James Walker recieved hats. Christian Krueger later recieved his hat from the sky. The "Q" actually represents the Rancho Cucamonga Quakes. No lie. This group of boys was inseparable, having become close friends 2nd year. They were always easy to spot together in their matching bright, turquoise hats. The guys plan to make the hat a 4th year legacy. There are seven original hats in existence, but only four that continue to exist as artifacts of TiP tradition.

The group is also (apparently) collectively referred to by others as the "Frisbros".