Sadie Ray Rittenberry is truly an amazing person who is loved by everyone. So far she has attended West 2017 and West 2018. Sadie’s first year at West she was in Ana’s RAG and she was in Psychology of Decision Making. In PODM, Sadie met her best friend Natalie Bardin (Nat). Sadie had a relationTIP with Luke Yium. Sadly, this relationTIP did not continue into her third year. While Sadie was a third year at West, she was in Kirsten’s RAG and was roommates with her best friend, Nat. Every night her and Nat would get turnt to various songs such as Jordan Belfort. Every night an RC would also knock on their door around 12-1am which they ignored every time. Sadie was in a relationTIP with Chris Sedlock and was in neuroscience. She loved her neuroscience class and had many great friends in it. Sadie is a super cool person and super kind. Follow her on Instagram @sadierayritt

[Disclaimer: if one doesn't read this article in a Borat voice, then it is invalid and a blasphemy to Sadie Ray's memory.]

Sadie Ray Rittenberry is a literal sunshine girl. She is simultaneously the bitchiest and most heartfelt girl on the whole campus. As this entry is being submitted by her best friend, El Lockhart, it may be slightly biased. But there's nothing wrong with that. NO EMOTIONS 2K19

As this year was Sadie Ray's fourth and final year at Duke Tip, please enjoy her eulogy. May the spectacular memory of Sadie Ray live forever in our hearts. She will be remembered for encouraging El to growl at some lady's dog, her enthusiasm for the pike game, her torrid affair with one tall boy and resulting paralyzing fear of his father, her love of El's Borat voice, anemia, and her slappable face and equally slappable ass. In fact, Sadie Ray was such a ledge that she made 'throwed' happen. 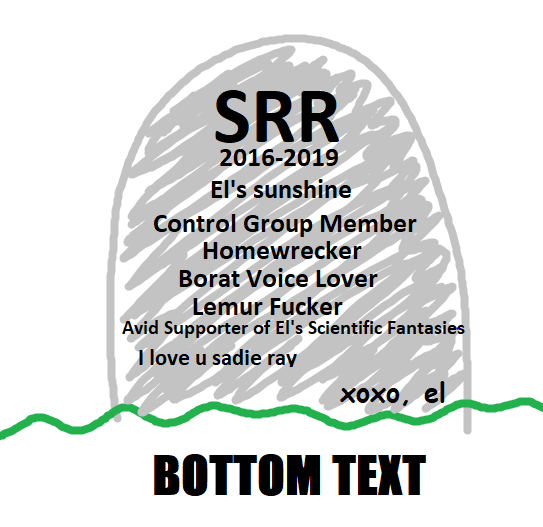