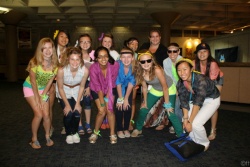 Sam's RAG of Duke West Term 2 2012 was located on first floor P. Their BBRAGF was Jordan's RAG (Juicy Muffin Gang). Jordan's RAG slept on top of them every night (which was kindly pointed out by Steven Monroe the first day the two RAG's met). Sam's RAG, with their amazing moves and their amazing choreographer Kirstin, took home first prize for TIP sync. The girls couldn't believe they had won. As their name was called out ... they just sat there and ... well, let's say they were dumbstruck. The girls in Sam's RAG also had a mint Oreo problem.

The Super Sloths were proud members of the Grellow Team: The Incest Color.