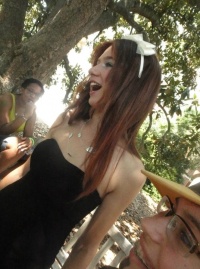 Sam Callahan is handsome, funny, and makes a gorgeous woman. He left behind a legacy of unmatched TiP spirit (especially showcased during the Quadfest Miss TiP Pageant he won two years in a row) and carries on his active involvement through TiP Nation and various other TiP related groups. He plays the trumpet, piano, and the recorder, but he cannot juggle, and is known for giving people headaches. Sam is a interesting person who is a huge movie buff and has impeccable taste in fashion. Conversations with him can brighten your day because of his amazing personality and an unending stream of interesting topics. When talking to him there is never a dull moment.

Sam attended East Term 2 for his second and third year (2010 & 2011) and did not return for a fourth year. (Rumor has it he had advance notice that Miss TiP would be canceled and stayed home in protest.) His second year he was in Sean's RAG,and took Microeconomics with John Kane in which he "bombed" his debate due to some made up facts on Google adsense. On the last night he hooked up with the fabulous Hannah Crow, but this was an admittedly weird mixture of personalities. His third year he was in the famous Steve Wazny's RAG (reportedly before Mr. Wazny became rich and famous), and took Revolution and Terror with Eric Oakley. He participated in one of the most notable TiPsync acts of our generation, Mambo No. 5, which should have definitely placed first. He hooked up with Sidney Cobb, Paige Nicolau, and he made out with Rachel Post (all of which were unaware of eachother). One of the aforementioned girls was previously and lesbian, but Sam was so manly and attractive that she could not resist. Sam is obviously famous for his reign as Miss TiP, but another shining moment in his TiP career was the final dance of 2011 during which he wore nothing but a purple morphsuit and was forced to go back to his room and put on pants because RC's do not understand how much better life is without pants on.