The Sexy Train was an epic event in which the fourth year exhibitionists from West term 2, 2010 ran around the halls shirtless. These few brave souls included Ethan, Preston, Solomon, Charlie, Harrison, Kyle, E-Money, Preston, Jandro, Will, Felix, Michael, Eli, and Tyler. It caused many girls to pass out on the spot due to the overwhelming amount of sexiness. Sadly, this was put to a stop by RC Tara and TA Greg who the Sexy Train ran into on their way down to the first floor. Greg subsequently chased down the streakers while holding a moist cake under one arm. Kyle was later caught and castrated by the Gestapo (much like Justin Bieber in "Justin Bieber: A Boy Forever"). However he refused to give up his fellow Train members and instead took the punishment for them all. Felix was definitely the sexiest of them all. 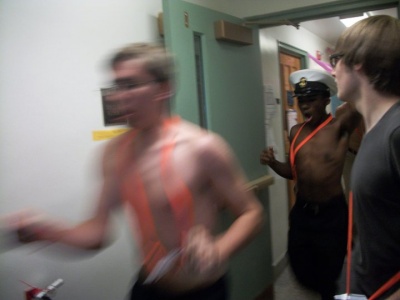 A very small portion of the 2011 Sexy Train.

There were plans to perfect the Sexy Train in 2011. Improvements would have included:

Well, The Sexy Train was indeed revived at West term 1, 2011. However, almost none of the improvements were actually realized. Body paint was never bought, and none of the fourth year girls were into the idea. Also, flaws in navigation led the Sexy Train to make the 1st floor of K hall its first stop. This was pretty bad, and, though it led to much swooning by female staff members, it caused a very premature capture of the participants. RCs Olivia, Tara, and Sean were key to the hunting down of the Train this year. Speaking of Sean, the Sexy Train was made up of almost all Monarchs. These courageously daring members included Josh (proud engineer and supplier of hats), Connor, Greg, Andrew, Barry, Duncan, Sean Courtney, and George. The rest of the group was not allowed to join due to the overwhelming sexiness that would surely injure other TiPsters if all monarchs were present and without shirt. The only other memorable member of the Train was the Jer-Bear, Kris Stolarczyk. He, Josh, and Duncan heroically took the fall for the entire Sexy Train, losing one toe each and receiving a stern talking to by Sean later that night.

The sexy train was revived in 2014 by the fourth year guys: Barry's Kings of the World and Josiah's RAG. Once the fourth year guys learned that Barry and Josh had done it in 2011, it had to be repeated. After the last dance (Thursday night) at 11:10 pm, the second coming of the sexy train left the station of Jordan and Mitul's room, traveled to the second floor all of the way around from O to K. They were then stopped by Brandon (OSD) so they wouldn't get to the fourth year girls' hall and ran back upstairs to the third floor and ran all of the way back to O. A couple minutes after the train returned, Brandon yelled for all of the Fourth Years to see him immediately. Instead of reprimanding them, he called them back (so the girls would chill out) and they went again. This time, they went straight down to first floor O and ran to L before finally returning for the last time. There's a video both from Scott running in the sexy train (in TiP Nation Facebook page) and a video from the girls hall as they waited for the train to arrive (https://www.youtube.com/watch?v=Gc3aIy_chfE&feature=youtu.be&app=desktop). Members included: 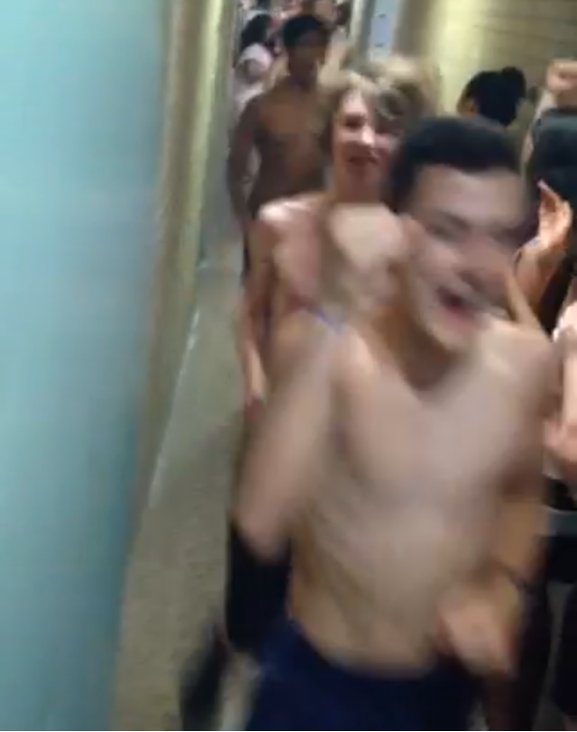 Although there was much hype about reviving the Sexy Train again(as one of the original members was an RC again), the 4th year boys were told that it wouldn't be permitted, at the risk of losing not only their IHOP trip on the last night, but also losing 4th year speeches, and added/extra security/RCs on the 4th year halls on the last night. This is due, of course, to the fact that it is 2015.