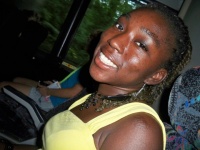 Shae' was a 3rd year 4th year. She spent all 3 of her years at Duke West Term II. Her first year Shae's RC was Rahjai and she was in Forensics with Carolyne as her teacher. Her second year she was in Alysen's RAG and in Social Psychology with Brandy as her instuctor. For her third and final year Shae's RC was Tara and she was in Abnormal Psychology, the instructor was Christie. Shae' was an honoray Zulu member as a 2nd year 3rd year. She was very close with Warren Peace (with whom she took classes with her first two years) and Ajay. As a 3rd year 4th year Shae' roomed with Sarah Miller. They were both members of New Trinity. The third member was Xan Failing. Together they set up the 4th year skits and tried to orgainze most things. Shae' was a very fun person who got a long with just about everyone. During her 4th year speech she announced that she liked Solomon McGinty. He then came up on the stage and gave her a hug and a kiss on the cheek. It was adorable. Shae' spent her 3 years at Duke just being herself. She will truly be missed.