Social Psychology was the best class of Term 1, or some may even say the entire year or ever, at Duke West. 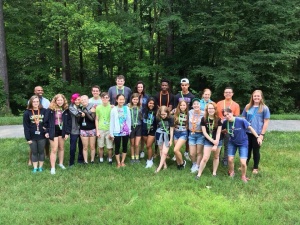 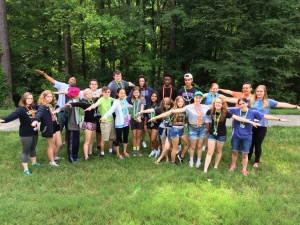 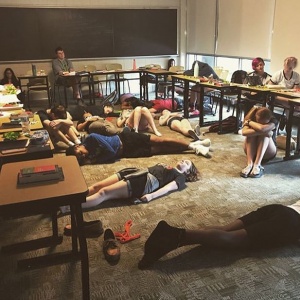 "I RRRRRRRRRREST MY CASE!" - Indigo

"Should dogs be allowed to vote?" - Snider, again

Sometimes, Calvin likes to make his intro slides a bit more interesting by replacing his and Erin's name with something ridiculous.

Social Psychology - "Most likely to not feel so good"

Emily - "Most likely to be the next Lindsey Sterling"

Reese - "Most likely to go outside"

Colby - "Most utilitarian/likely to be argumentative"

Tess - "Most likely to be a model"

Sofia - "Most likely to be a demigod"

Savannah - "Most likely to be Samantha"

Josh - "Most likely to turn into a bag of chips"

Nairita - "Most likely to leave her clothes in the laundry room"

Jack - "Most likely to T-Pose"

Olivia - "Most likely to hold your hand"

Calvin - "Most likely to take their shoes off"

Erin - "Most likely to be a Doctor"

The Fabulous Social Experiment during Lunch of Week 1

T-Posing on the stairs of Brodhead

During the 1st week of TIP, Calvin and admin allowed Social Psych to do mini-social experiments on everyone(aka annoying everyone). The experiments were a huge success, but it may have cemented our reputation of being the "weird ones from social psych".

Ninja is a regular game at TIP, but Term 1 of 2018 of Social Psych played this during any available breaks. The winner will be in the winner's circle and is listed below. 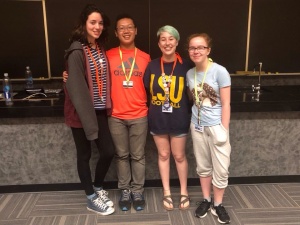 Group leaders of the fab experiment from left to right: Gwen, Derek, Indigo, and Katie

"The Effect of Material Consequences on the Iterated Prisoner’s Dilemma"

Social Psych created a more official social experiment revolving around the Prisoner's Dilemma and this experiment was more of a success than anyone anticipated. 110 TIPsters from 7 classes participated in this study (around half of Duke West) and the data produced some interesting results on how TIPsters make choices upon the relationship between their fellow classmates. The experiment went so well that it garnered some attention from admin and Social Psych was able to share a final presentation of the results on the last day.

The link to the presentation is here: [1]

An awesome purple shirt! Duke Tip 2018 on the front. On the back, it's "We live in a society" along with a picture of a hand over a globe and everyone's names.