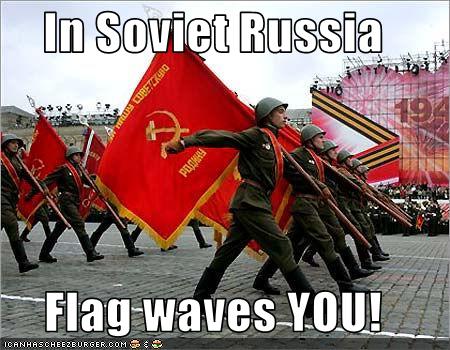 Another one of the now-infamous shakespeare inside jokes was the "Soviet Russia" joke. Created by TA Emily, the joke was brought along into its current stage by Katie, Isaac, Hannah, Darby, Delaney and the two leaders, Mira and Jack. The class created an entire soviet russian government based entirely on a joke. The joke was made infinetly more funny by the fact that all of the TiPsters told all of the jokes in terrible russian accents

The types of jokes can mainly be divided into a few categories 1."In Soviet Russia..." For example: In soviet russia, you no leave country. Country LEAVE YOU!! 2."Government-Regulation" for example: Vladimir will now take government-regulation bathroom break. But only because government tell him to. 3. "Moscow" for example: Moscow, only city in world where vodka is food group 4. Role Based. For example: RUSSIA IS BEST!!!!!!!!!!!

Blue is illegal. Isaac is illegal. Russia is best. do as president say or you will be shipped to siberia or put in big refrigerator upstairs. no extra bread.