From the archives of TiPWiki, the unofficial Duke TIP Wiki
Jump to: navigation, search
Squid King is the unofficial, relatively official, UGA title. Squid King is (un)officially the replacement for TiP King/Monarch so that the trinity will stay [as of 2015]. The Squid King is a respected, for squidliness, and power. All shall bow. The squid shall live on! 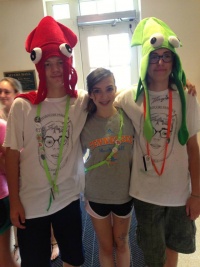 The Squid King was a title created by Zeke Streetman, he did this completely unintentionally. In his time at TIP he became the Jester at UGA for 2013, his handing down of the title was much contested by the fourth year court. He was not swayed, but doesn't particularly remember who got the title. The original goals of the Squid King involved creating a cult large enough for the ego of the young man. Many joined, but many fell out. Eventually it devolved into a facebook page of nonsensical ramblings. The court of fourth years in that era frustrated the young squid king greatly, because all of these titles are intrinsically silly. The original squid hat for which all of this came was purchased at the Middle Tennessee Anime Convention, and sits longingly at the aging boy (now man) as a symbol of the specialness of TIP, and the value of a place where a very strange boy could create something for many people to enjoy.