TAYLOR JONES I LOVE YOUR WORK!

Taylor Jones is/was the TA for SoPsych (Social Psychology) Term 1 2k15. He kinda looks like a really sad Hugh Dancy and has recently completed his rites so that he can officially be called a tier 10 hipster.[[ 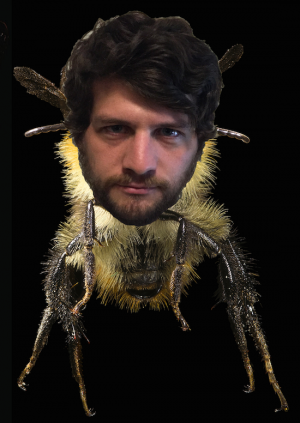 An Artist rendition of the living legend, Taylor Jones.

Taylor is a magical creature that can be found roaming that campus in much haste. He is known to eat lunch three to six times a day and shows up for every meal early. His meal habits involve eating cereal, cereal, and more cereal, as well as "sad, cold, instant coffee". Taylor, despite his grace, still has faults; He is as flakey as a croissant and refuses to take us to the cafe (even though darla has a coupon for a free drink). He is also known to miss his chair when he sits down, and its reported that he walked into a bush once, which is really rude tbh. Like, I know bushes cant move, but as a wise Sports Camper once told me while looking at a squirrel,"thats nature. Dont mess with nature."

Taylor is currently married to a mysterious women who no one knows the name of. Their relationship is very shakey, and he threatened to take a different girl to the dance, but when they get a long they enjoy cannoning and listening to MoonSun, a band so hipster it doesn't actually exist.

During the second evening as the SoPsych class was using their evening study time to interrogate Taylor about his personal life. This was when Taylor admitted to his secret hippie lifestyle outside of Duke TiP. Taylor admitted to drinking "sad cold instant coffee". Furthermore, Taylor is extremely pretentious and only listens to MoonSun, because that's the only band whose music is never played on the radio. If this music ever happened to be played on the radio, Taylor would immediately shun the band and chose a new fave.