The Holy Grail is a cut off water bottle top with amazing powers.

Origin: During East Term 2 2007 the RAG of Philip Sugg had an awesome term book picture mimicking the famous Last Supper painting. The "goblet" held by Philip in the picture has been inscribed (in Sharpie) with the title "The Holy Grail." The grail was later blessed by a ring of internet-ordained ministers along with the Llama and the Book of Amusing Sayings by Christoher Long. 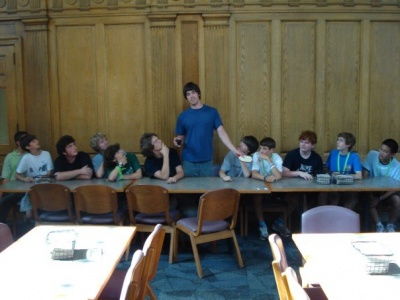 Powers: The Grail (currently) has four uses, all discovered by the Goblet Crafter and first Goblet Bearer, Joseph Labatt. First, it may be drunk from by the Goblet Bearer as a normal cup, making any liquid drunk taste far superior and any water holy with the inherent power it attained in its blessing. Second, it can funnel water from any source into a second bottle, thus creating an entire bottle of holy water for use by anyone. Third, it can be filled with small amounts of water and splashed on others to purify them (sometimes along with a cry of, "Shazaam! you are purified!") The last use discovered by Joseph at East Term 2 was that the cups in the dining hall are the perfect size to invert the goblet and insert into the cup. Thus, whatever drink you have chosen can be funneled through the unscrewed base of the goblet, resulting in the same effects to a lesser extent as drinking directly from the Grail. 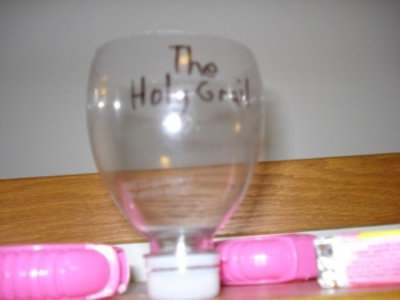