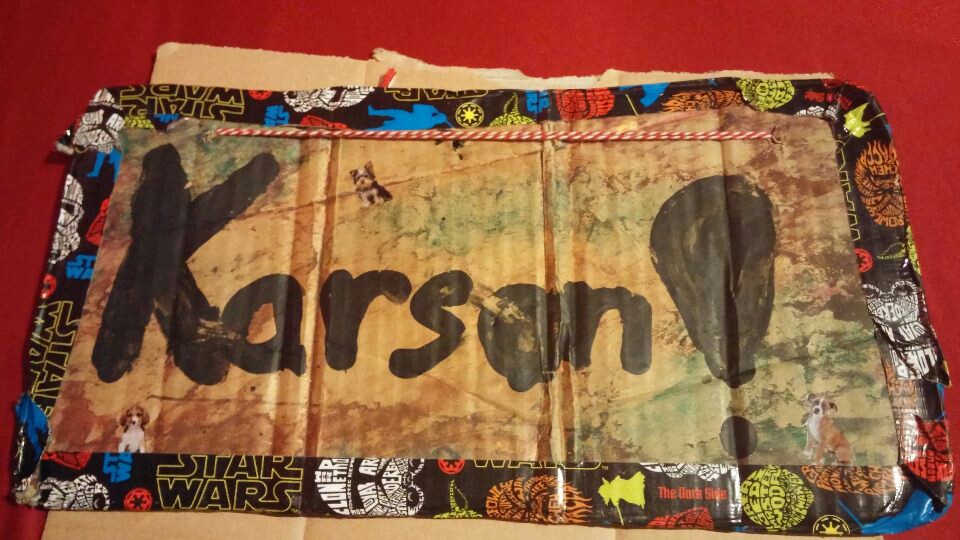 One day Karson and Jacob (and like two other people) were talking on Skype. They didn't know each other despite going to the same campus, so they decided to make signs and scream out the other's name on moving in day. Term 1 Uga 2016 they met and, while there was a disappointingly low amount of screaming they did have signs. Karson poked a hole through his sign and wore it on his lanyard. He kept it on the whole three weeks (except when he lost it, forgot it, gave it to other people, and just plain left it in rooms) and it was decorated. Kathryn and Hayley painted it , Riley, bless her adorableness and innocence and loss of a point when holding hands in front of a picture of a candle, provided star wars themed duct tape and doggo stickers, Willow gave Karson a string which he implemented onto his sign, and Hannah wearing her roommate's onsie and her misnaming of the already named Joey caused a little Roo sign, which looked like Boo, to be taped to the back of the sign and finally a strip of duct tape Karson stole from his robotics class. Karson passed on the sign (note: not the sign but allowing them to make another sign. Karson loved the sign too much and kept it forever. Except Jacob made a second sign for Karson that he passed on) to Hannah.

This sign also served as the glue between Kara and Karson’s relationtip. They met through the sign, when Karson was walking through the third floor and Kara yelled out to him, “Hey, you're Karson, aren't you?” The following Friday, at the Big Event, they shared the sign as a fan while Kara leaned against Karson. Without the sign, the relationtip would’ve never been possible.

-One must decorate the sign. I recommend putting whatever artistic mandatory fun evening activities (finger painting, kraft night, etc.) first and if one doesn't get said activities, then one should give one's sign to the rc running the activity or anyone they trust in said activity.

-One must carry the signs of the previous sign holders, but not on ones body except on moving in day where one should have all the signs, and having like 3 signs all the time would be annoying. Keep them in your rooms or something and bring them out when you're bored or for some occasion that may be special. (Note if anyone asks someone to prom with the signs somehow making a pun to tiprom they are Karson's hero and he will love them).

-One should (like Karson did) make a lot of tiny cardboard and write their names or something on them and give them to people.

-The first sign was created by Jacob and gifted to Karson