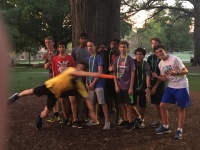 A rivalry to last a lifetime, Duke West TIP and Duke East TIP have been bitter rivals. On June 26th, 2017, this rivalry finally found a vent as a Duke East RAG took a RAG night at Duke West. While waiting for their bus, the Duke East students challenged the superior Duke West (West is Best) to an ultimate frisbee game.'

At a 10v10, the match was opened with multiple West TIPsters chanting "WEST IS BEST! WEST IS BEST!" until the first pull. Being the gracious, welcoming hosts they are, West's 10 pulled to East's and the match began. Within 8 seconds, the clumsy East RAG dropped the frisbee on the first throw. The amazing Duke West players rushed the end zone and scored their first point within seconds of going on offense. This was met with many whoops and cheers by the West onlookers, who were eager to see their campus prove their superiority in more ways than just a pretty campus.

Five minutes later, Duke East still couldn't catch up to the star players from Duke West, who had increased their lead to 4-0. What's more, this was only done with three of the players from Duke West's TIPster superpower team Fam3. Duke East's team was never able to get off more than 3 throws before West's stellar defense stopped them and scored, marking them for their impending UTTER DECIMATION. East's team never scored a point that game, handing Duke West the first ever win in the rivalry with Duke East, and the 10 players who did it eternal glory among TIPsters. West has just proven what East has refused to admit this entire time: Duke West is the best campus there will ever be, and now there's no way to deny it.