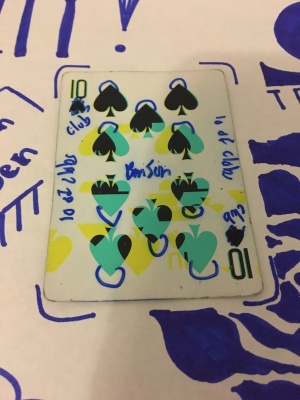 The 10 of clubs is a relic passed down to someone who is an avid card player and enthusiast. It was started by Nathan C when he passed it down to Ben Sun in 2016, citing the lack of card related relics at a camp where cards are so prevalent. Ben kept it for his third year and passed it down his fourth year. The card is actually a 10 of spades with the spades crossed out and "10 of Clubs" written over it. Nathan had supposedly lost his 10 of clubs, so he got a 10 of spades and made the modification. Keeping in the tradition, Ben also lost his 10 of clubs and had to make a new one to pass down. Losing the relic has, due to Sophia's irresponsibility, become a relic tradition. It is currently expected that the next holder, Joey, will also lose it due to his general lack of organization.

The duty of the holder is to always be involved in a card game, to always have cards on them, to always be good with cards and usually someone who appreciates cardistry and magic.

The card also holds a special Mao rule which must be learned to receive the relic. Of course, Ben never taught Sophia until after her final term was over, so Joey never learned. Whether he will learn or not is up to Sophia, but he also has the Book of Mao from Jackass Southturd, who consolidated his beginning relic with Sophia's onto Joey due to a general lack of cardplayers.

Sophia Chang (3-4, West East West) returned to West T1 19, which in the first place plays more cards, and where she turned the relic official. By the way, the Ten of Clubs is now a West Relic. Suck it. Oh how the turntables.