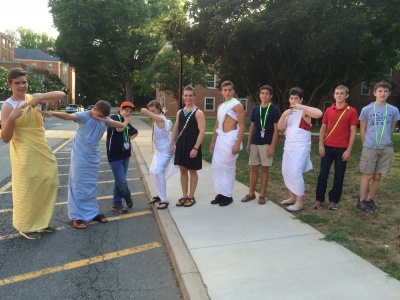 2016 WFU Toga Escapade Revelers outside of Collins Hall before the dance.

The "Toga Party" was executed by the 2016 Ba$ement Boyz at the second week dance. Due to questions about the tippropiatness of the Toga, the Boyz arrived late to the dance, but made quite the entrance nonetheless.

The participants were all member of Henry Saussy's RC group:

The togas were generally well-received and were a hit with the staff. The only downfall came at the playing of REM's "It's the End of the World as We Know it," when most members had to refrain from running laps.

It should be noted that TK's RC group did Henry's makeup

*Cade removed his Toga early in the dance.

(Togas were revived at the second dance at Georgia Tech 2017 Term 1.)