Adrian's Original Nukes were the Nuclear Science class of term 1 2014. They were obviously the best class that had pretty much the best people in camp. They accomplished a lot in three weeks including starting #thanksricky. Nuclear Science term 1 2014 will always be the original nukes that term 2 can't even touch. The instructor was Adrian Fontanilla and the TA was Ricky Gaytan. The class had a very interesting mix of personalities and pretty much half of the Nukes were there because they wanted to blow things up. 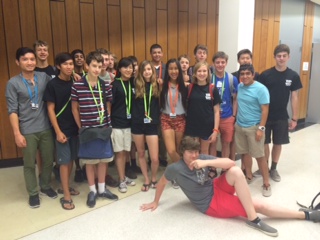 The great Nukes of term 1 2014 with their gods, Adrian and Ricky

Ricky, our great overlord and TA, was sadly late to get the nukes on the very first day. He also got them lost not once, but twice. Rather than completely hate Ricky for the rest of the term, the two fourth year girls in Nuclear Science, Alyson Win and Michela Lew, made Ricky a god for their new religion, Rickyism. Rickyism was practiced for the first two weeks and became so popular that Adam Burke made an instagram page called rickyfanclub. There was also a hashtag birthed by Alyson Win called #thanksricky that became very popular to use every time Ricky messed up (which was quite a lot during the term). It became overused very quickly but it was still nevertheless hilarious.

Radioactive Mafia was the icebreaker Adrian may have intended to make the class bond along with introducing the nukes to nuclear science, but it instead created tensions and rivalries throughout the class. It works just like regular mafia, except there were six murderers(called black atoms) and 2 doctors(called scientists).

The punishment die was set up on the first day so that if someone were to break one of the rules in the nukes' rule agreement, they would have to roll the die and be sentenced to a punishment.

List of People that were Punished and What Their Punishment Was

On the first day, Alyson and Michael were prepared for breaks by each bringing two decks of cards. They had a very strong rivalry in ERS from the first day until about the second week. Alyson taught the class how to play fun filled card games such as ERS and FU(Friends United). Until one day, she and Michela Lew finally played a round of her favorite card game, Nertz. Both of them were very good players which ignited an intense and friendly rivalry between both of them. It was often accompanied by Proto-Blazemaster and Will watching Alyson's not so discrete groans of frustration at her crappy deck and Michela's calm intensity. This rivalry began the end of the first week and it would be pretty much all they played during break up until the end of TiP. Steven Chang joined their intense games the third week and the last day was a nertz tournament with Adrian betting on Alyson to win the nertz crown and Ricky betting on Michela to win the crown (Though steven and team soviet were still in the tournament). Their rivalries the last day got so intense, that Alyson, Michela, and Steven played Nertz in the corner in the dark during Wall-E using their phones as flashlights to guide them. The tournament ended in Alyson and Michela tieing for first. 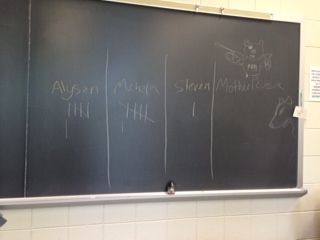 The final score of the Nertz tournament

Broshiism is the term used to describe the cult that worships the god and savior, Yoshi. Started by Alie over a year ago, Broshiism became popular among mainly 6 people in Nuclear Science. They were usually a team if Adrian divided the class into 3 teams. They came to do pretty well in Chemistry charades, but they sadly were obliterated in jeopardy with a sad -1370 points

Alyson and Michela became known to the class as "The Shippers" (Shipping is when you want two people in a relationship together). They boldly asked Ricky and Adrian one day if they shipped students together, but they were sadly shot down with weird looks and questions on what shipping was. Alyson and Michela shipped couples such as Adalie, Stelsea, and Jadrian(Most popular ship in the class even though it was a crossover ship). To this day Adrian still gives the duo credit for teaching him the ways of shipping.

Jadrian, AdriJen, Jendrian, whatever you want to call it, was a popular ship that involved Adrian(Our great instructor) and Jen(The neuroscience instructor). It surfaced when the Nukes spotted Adrian and Jen spending a little too much time together the second week. The day of the second dance, Neuroscience burst into the Nukes' classroom demanding that Jen and Adrian slow dance the second dance (Litle note from Alyson: Sorry guys that was my fault I shouldn't have opened the door). Although their timing was unsettling, Adrian slowdanced with Jen multiple times the second dance and Fahim has pictures. The ship stayed strong the last week and is even on the RelationTIPs page. Even though Adrian denies the existence of Jadrian, we all know it was canon.

Adrian had Nuclear Science divide up into four teams the second week to make a Van De Graff Generator. There was a girls team compiled of all four girls in the class, and then all the boys (Barely remember who was on whose team). The problem with these generators was that Adrian had bought some not so great quality supplies, decreasing the quality of the generators. The girls, determined to show their grade A engineering skills, finished the construction of their generator first. They were used as the guinea pigs of the class to see if it would function, and sadly, it didn't. Some of the guys' generators worked, but the girls' team was sadly a fail.

The Torrential Downpour and Class Selfies

One day, for the last hour of class, the Nukes went to the Duke Gardens to take pictures and make superlatives for the termbook. Although they were successful in making superlatives, right after they took the class picture, a torrential downpour started (Like it was really really bad). The rain and thunder and lightning was so bad, the class had to take shelter for about fifteen minutes in an unknown classroom building. They were all soaked and salty because it was interfering with their free time, but then Ricky had a wonderful idea. He took his camera and faced it toward the whole class and thus the Nuclear Oscar Selfie was born. 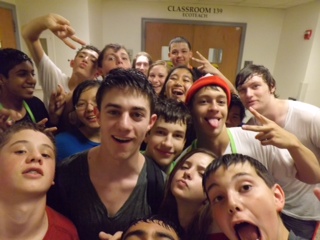