Antony Samuel was a 1st-year/4th-year at West Term 1 2013. He was in the DUNC SQUAD and took Electrical Engineering. He is one of the chillest, most awesome, and coolest kids out there. Antony is famous for his incredible beatboxing talent and beatboxing to Rack City. Antony broke his glasses during the middle of the term and has duct tape on the corner of his lens which made it look like he had ghetto Google Glass. Antony was the giver of the best relationship advice known to man (#1girl). For the last dance, Antony can-can-ed down the red carpet with Andrew Tanaka and Ryan Brandt. Antony was a total gangsta with enough swaggg for the world. Antony was really bad at signing people's term books. Joanna Sands complained about Antony's note in her book. Then, Antony wrote the most amazing and sentimental passage his magical mind could think of, filling up a whole page. Antony also brought a lamp to camp...lol. Antony was also on Asian-LockDown and had to Skype his mom every night. 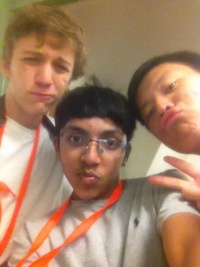 What You Need to Know About Antony Samuel