Duckie and the Twelve Husbands

This article is about the story that [RC Duckie] told Tipsters on the evening of June 17th, 2017, at the end of the first week of Term 1 at the Duke University campus to prevent the Tipsters from growing impatient while the RCs were having technical difficulties in getting the movie to start.

She traded the illusion of love to twelve classmates in elementary school in Zimbabwe so she could get their desserts.

When I was in kindergarten in Zimbabwe, I was the most beautiful and attractive girl in the entire school. All of the boys would crowd around me and want to be with me, so in first grade, I got an idea: I saw one of the boys with a dessert that looked really delicious, so I walked over to him, and I'm like, "Hey! I'm beautiful, you love me, and I really want that dessert, so if you give me your dessert every day and don't tell anyone, we'll be boyfriend and girlfriend--like--secretly." He, of course, agreed because I was the most beautiful girl in the school. I did this with eleven other boys, and none of them told anyone else, so every lunch, I would walk around, collecting desserts and then share them with my friends. And none of my husbands caught on, and none of them told.

So by second grade, one of the boys was really excited about our relationship and wanted to tell everybody so he could brag about it. I didn't want that to happen because if all of the boyfriends found out about my other boyfriends, they would stop giving me desserts, so I told him, "That's not how love works. If you tell others about it, it decreases." He still wants to tell everyone else, so I'm like, "Hey! Let's get married!" and he's like, "Really?" and I'm like, "Yeah, but only if you promise not to tell anyone else about our relationship." So I get out a piece of notebook paper, write a marriage contract on it in pencil, and we sign our names in crayon. Then he keeps the marriage contract and doesn't tell anyone. So when the other boyfriends come to me and want to tell everyone who their girlfriend is, I get out another piece of notebook paper. So I get married to twelve boys, and none of them tell.

So I'm married to twelve classmates, and take their desserts every day, and they each think that my love for them is special and unique. Then I get a crush--an actual crush--on another boy, one that I'm not married to. He's like gorgeous, and he's in another class. So one day, at the end of recess, we're lining up by class to go inside, and there are separate lines for the boys and girls in each class, so our lines are next to each other, and I'm trying to work up the nerve to at least ask him what his name is, because up to then, I didn't know his name. So some of the other boys start fighting, because that's how boys are, and one of the other boys shoves him, and he falls, and I'm only a few feet away because our lines are next to each other, so I don't have time to get out of the way, so his head hits my head, and our faces collide, and it looks like a kiss, but even though I have a crush on him, it was purely intentional, but it looked like a kiss, so one of my husbands at one corner of the playground pulls out his marriage contract and says, "Hey! She's married to me!" And then another husband at the opposite corner of the playground pulls out his marriage contract and says, "No! She's married to me!" And all of my husbands find out, and none of them give me desserts anymore.

So all of the boys hated me, and I was like a social outcast at school until I moved to America.

References to Duckie's twelve husbands are often in the form of a student, portraying Duckie, saying something along the lines of, "I need more attention! Where are my twelve husbands?" or "I'd give you my husbands' desserts, but they're all for ME!" in skits at talent shows or RC impressions at Swarm Fest. Also, there is this meme that has been spreading around the Tip Wiki: 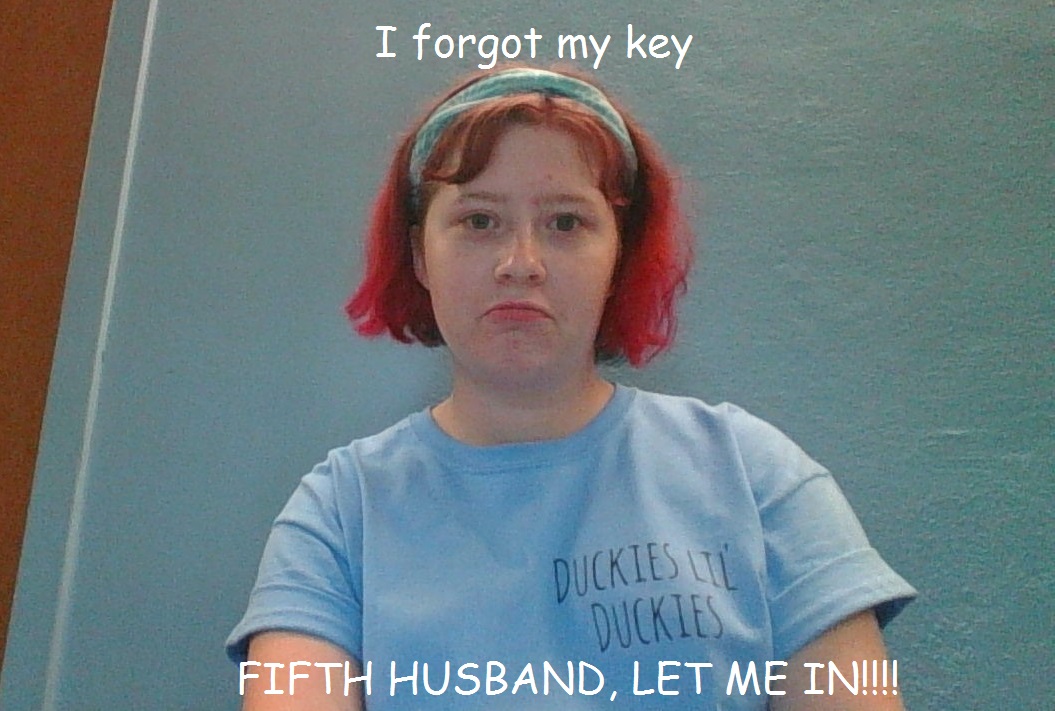