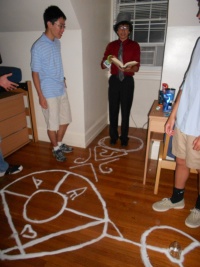 Lucas Ryan and the First Exorcism

The Exorcism is a tradition at East Term I, whereby the appointed Exorcist or “Soul Stealer” purges the soul of a chosen RC, releasing the demon within, before finally returning the RC’s soul to its owner. The tradition began in 2012, when Lucas Ryan and the rest of Nathan's Hotdogs purified their RC, Nathan. The Exorcism stands apart from other traditions because the Soul Stealer must be a third year, and the tradition must be passed down to a second year at the end of term. The Exorcism passes from year to year in the form of a bottle, a book, and the title of Exorcist.

On the last Wednesday Lucas Ryan was looking through the union store (with Alexa and Keely!!!) wondering what mischief he could get up to. He found that they sold Morton's salt and the idea hit him. He returned Thursday day to purchase the salt (I still think he should've gotten the garlic salt, but he said it would stink up our floor too much and the bottle wasn't as big), and began implementing his plan. He and Andrew Pluemer went to the computer lab in Brown and translated some latin. The result read "Ego dico super senior vox moveo vita vis illae vir in solum. Is vadum tunc perceptum ut sedec in substantia. Somes vadum intereo in processus. Si substantia insum intus alter orbis est fluc in somes of vir. Vita vis vadum redeo quod vir mos have suus vita iterum." which was translated from "I call upon the elder powers to move the life force of this man into the bottle. It will take the form of the substance and learn to reside therein. The body will die in the process. If you wish the man to have his life back, he must drink the substance from the second circle. Then his life will return unto him." They then went to Lucas's dorm (his roommate Phillip had left on Wednesday for china)to begin constructing the circles. After dinner Drew and Lucas returned to Lucas's dorm with some mellow yellow mixed with blue powerade which was placed in the adjoining circle, where they continued to draw the circles and runes required, they were almost late to evening session because they worked so diligently. Then after the final dance that night they returned to place the finishing touches. At their RAG meeting moments later, they told Nathan they had something to show him in Lucas's room. Nathan said he would be in after he grabbed something from his room. Nathan's Hotdogs all filed into Lucas's room, and they turned out the lights. Someone shined a flashlight from their phone so no rules were broken. Nathan entered the door to see Lucas standing in one circle in a dark red shirt, slacks, dress shoes, and a duct tape top hat while holding a book (he wore it for the dance minus the hat). Lucas asked Nathan to step into the circle facing him and warned him not to smudge the salt. Nathan did so and Lucas began chanting the Latin while the rest of the RAG started a low hum, when Lucas finished the Latin, Sam Jarden took the bottle of mellow yellow mixed with blue powerade and nearly drowned Nathan with the holy elixir by bringing it to his lips and making him drink. The RAG then chanted "You are saved" after Nathan drank Zach Toole picked up the bottle and chugged the remainder. A picture of the circles along with Lucas standing in his circle and the bottle in the adjoined circle can be seen below, they used a total of 26 oz or 1 pound and 10 oz of salt. (This was done for the second time in 2013 at term one, however Terricia took Nathan's place.) 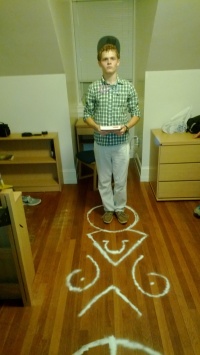 Dylan Quintal and the Second Exorcism

Lucas Ryan did not return to Term I the next year, due to a vacation in France, and thus attended Term II for his fourth year. However, on the last Wednesday of Term I in 2013, Lucas was contacted by Dylan Quintal, a third year at East. Dylan had suddenly remembered the Exorcism from the previous year, and he asked Lucas whether Lucas had chosen anybody to do it next. Lucas replied that he hadn’t, and at that moment decided to bestow the responsibility upon Dylan, who became the second ever Soul Stealer. That Thursday, after the last dance, Dylan cleansed the soul of Terricia, who had returned to TIP to fill an empty position after the Event that year. It was Terricia’s last time at TIP, so she was the best candidate for Exorcism. The ritual that night was an overwhelming success, and thus a tradition was born.

In 2016, the runes were destroyed during the last dance. The exorcism, albeit rendered incomplete by the lack of effective runes, proceeded as best as it could with little time before the RAG meeting. Harrison, having already been purified once, was still sufficiently cleansed by the somewhat incomplete ceremony.

It has become clear after many instances that the RCs normally do not like the ritual to be in the public eye. It is recommended that the procedure is done in a secluded area with NO video or pictures to maximize RC comfort. It is also recommended that the exorcist alert them the day before the ritual, even though it ruins the surprise it ensures that the RC will have their soul cleansed which is the most important part.

The following arcane information has been declassified for the public eye.

The newly appointed Soul Stealer must be given two sacred objects: The Unholy Bible and the Bottle of Containment. The first page of the Unholy Bible reads as such:

"This tome and the arcane knowledge within are for the eyes of the Exorcist only. However, the Exorcist may decide to share this sacred text with his or her chosen few, the Disciples. Beware the temptation of evil."

Little else is known regarding the contents of the Unholy Bible. 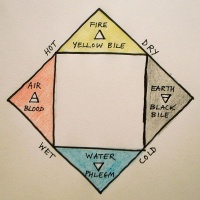 The Bottle of Containment is a glass bottle with a cork stopper and a wax seal. On the night of the Exorcism, the Soul Stealer fills the Bottle with a mixture of half Blue Powerade and half Mellow Yellow, thus through alchemy producing the Phlegmatic Mixture. Many theories exist regarding this solution and its soul-cleansing capabilities, the dominant one relating to Hippocrates and his medical theory of the Four Humors. 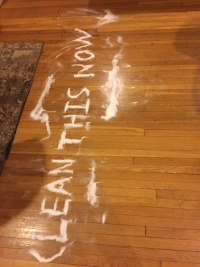 The Exorcist must purchase a 26 oz. container of Morton Salt from the Marketplace on the last Wednesday. Using this salt, he or she begins constructing the ritual circles and arcane runes on the wooden floor of his or her dorm room on Thursday. The runes may be constructed in a different room if the situation demands - this can be due to anything from a reluctant roommate, to an inconvenient location, to a paucity of adequate floorspace. After dinner on Thursday, the Soul Stealer fills the Bottle of Containment with the Phlegmatic Elixir (a mixture of one-half Blue Powerade and one-half Mellow Yellow). The construction of the runes should be completed before evening study. After the dance, the Exorcist returns to the room, with as many people gathered inside as possible. One appointed Disciple must lead the chosen RC up to the room. The lights must be off. When the RC arrives, the Soul Stealer says, "[RC], please step into the circle facing me. Be careful not to smudge the salt." When the RC has done so, everybody in the room must begin a low hum, and the Exorcist begins chanting the Latin incantation. When he finishes, another Disciple must retrieve the bottle from the second circle and make the RC drink the elixir within. This must be done quickly or the RC's soul will remain trapped within the bottle and the body will die. Even a drop on the RC's tongue should be enough to restore the soul. Once the soul is returned, a Disciple may choose to ingest the remaining liquid, in order to become to RC's eternal Soul Companion. This Disciple will hold a tiny fragment of the RC's soul within himself/herself forever. Thus the ritual is completed, the demon is purged, the host is cleansed, the soul is returned, the body is purified, and the Exorcist's job is done.

Translation: I call upon the elder powers to move the life force of this man into the bottle. It will take the form of the substance and learn to reside therein. The body will die in the process. If you wish the man to have his life back, he must drink the substance from the second circle. Then his life will return unto him.

In the future, a true student of the Arcane Arts may choose to find a better version of the Incantation, if this becomes necessary.