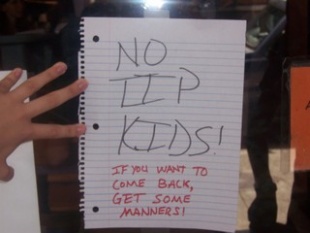 Francesca's is a coffee and gelato shop on Ninth Street. They sell all sorts of coffee drinks, delicious gelato, and wonderful Italian sodas. It is dimly lit and spacious with comfortable booths and soft music. It has a nice atmosphere for getting to know new TIP friends and goofing off with old ones. Stuff here tends to be pricey because many of the items are specialties (homemade gelato, soy ice cream, limonata, etc.) Some days they have open-mike nights, but the music is generally pretty bad. The place is commonly used as a meeting place for groups upon arrival or right before leaving Ninth Street.

If you are a guy and go to Francesca's on Wear a Skirt Wednesday, you get interesting looks - especially if you sit down on a couch and begin chatting with Young Writers and have no idea how to cross your legs. Term II 05's PILF class was one such class that went on WaSW to "read".

Sometimes derisively called "Francesco's" or "Francisco's" as the owner is a transvestite.

During Term 1 East '07, TiP Students were apparently rude and disrespectful of Francesca's and before the end of the Term, the class Revolution and Terror was greeted by a sign that said "NO TIP Students! If you want to come back, get some manners!"

EDIT: Revolution and Terror was not greeted by the sign, we caused the sign to be placed up. While we were there on the last day, a lady without saying anything came up and put the sign on the door.

EDIT 2: Apparently, it was because we did not tip (HA! How coincidentally punny.) them enough. For Francesca and crew, buying a full cake, plus enough coffee and pastries (not to mention tips for each of those) for a class of 18 did not help their business enough. Luckily, Super-Teacher Andrew resolved the issue later that afternoon.