The line when the lacrosse players didn't know when to go eat...(Photo courtesy of 4th year Maria Viitaniemi)

The Great Hall at Duke West is where all TIPsters come to wait in line three times a day. They wait in this ridiculously long line along with the kids from the Lacrosse, Basketball, Volleyball, Golf, Wrestling, and Baseball camps, along with the Institutes (because these camps never seem to realize that there is a schedule that is supposed to be followed in order to reduce the length of the line). Some conflicts have been formed in this interaction with jock kids, who seem to have no knowledge of Duke TiP.

As all TiPsters are here three times a day, appropriate hilarity ensues. It is not uncommon to be witness to large outbreaks of clapping, especially when a whole table is involved in beginning it. The food is well known to be somewhat inedible, and, in one case at term one 2011, a TIPster (Abigail B.) found a chunk of plastic in her pancake and an employee may have been fired due to the mistake. Singing Happy Birthday to a TiPster also brings great rewards, as many will sing along regardless of whether or not they know who it is for. This means that when saying the name there is an exaggerated drop in volume. It is also common to sing Happy Birthday to a TiPster when it is not actually their birthday. At Term 2 2010, RC Nate would initiate the birthday singing through the announcement of the TIPster who's birthday it was's name and age, and therefore everyone would sing along with no awkward dropping volume at the name.

Other fun activities can be done in the hall, such as

The Hall is part of the Union at West.

It is also important to note the gravity defying potatoes. When a TiPster gets potatoes in a bowl or plate and flips said bowl or plate upside down, the potatoes will not fall. (Though there is no official record for the amount of time the potatoes have defied gravity, a second-year TiPster timed one attempt during Term II 2009 at 3 minutes. Note: The potatoes had not fallen after 3 minutes. The general consensus was that if potatoes could defy gravity for 3 minutes, they could do so forever, and besides, boredom was setting in.) The pudding defies gravity as well, with the only current surviving record saying that after 7 minutes, the pudding still did not fall.

TiPsters must also be wary of the Jello, for when it has a sort of weird hard film, it is not to be nommed on. Ever. The consequences are too unbearable.

Bad things about the food: The Great Hall has been known to reuse the uneaten food of the previous day. Example: When chicken and peas were served for dinner one night, the following day the white sauce for the pasta had chicken and peas in it. The trays are almost always inconveniently wet as well. ALWAYS.

To be honest the only reliable foods in the Great Hall are the salad bar, the cereal, the PB&J station, and the drinks. All other foods are questionable.

One day during Term 1, 2012, a bird got trapped in the Great Hall during TiP. It proved no end of distraction to those eating in the Great Hall. Eventually, an RC opened the door for it and it flew away.

During a fourth year "Doctor, Doctor" skit during Term 2, 2013, the mortician hilariously remarked "Great Hall Speaking. You kill 'em, we grill 'em." This resulted in copious applause from the other TIPsters. 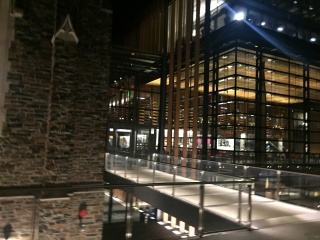 The West Union Building. Il Forno can be seen.

After two years of 90 million dollar construction on the West Union, it was finally open to Tipsters with life-changing, awe-inspiring, finally-not-horrible food. West's curse of awful food was finally broken with the addition of actual restaurants, bringing actual variety to the diets of Tipsters (as opposed to 2016, in which they were expected to eat what was put upon their plates). Restaurants available to Tipsters as of 2017 include:

The lines are known to get very long very quickly at many of these restaurants (such as Au Bon Pain and Il Forno), so RAGs frequently try to leave for dinner early. 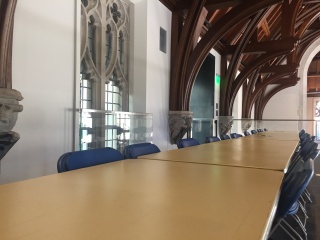 An example of seating in the West Union; this is half of the aforementioned long table.

Tipsters can only sit on the second floor of the building. There are several different areas within the area to eat. There are several tables along the path around the center, which contains access to the bathrooms, water fountains, and elevator (which Tipsters cannot use, unless necessary.) There are also two balcony seating sections, including one with several rows of tables and nicely cushioned chairs, and one very long table on a balcony that over looks Ginger & Soy. The long table is a great place for RAGs that want to sit together at dinner to claim. Generally, groups will sit in the same areas for all/most of their meals, so "claiming" of tables isn't an issue outside of the first week.