A different form of Couch Piling that was started at West term 1 09.

This involved people sitting on top of each other in a hallway trying to make it as hard as possible for people to get by, this worked best in a well trafficked area such as O first floor. The goal of hall piling was to count the number of people you made back track and take a different route due to the obstruction of bodies. The record for a 1 hour period, during the 4 to 5 free time, was 13 students and 1 RC, this led to a rule against it with the RCs claiming it was against fire code.

At East term 2 2012, members of Sydney's RAG, along with help from Maddie and Leland, had very intense hall piles in the second floor hallway of Brown (where they could usually be found sitting around during 4-5 free time), culminating in the hall pile to end all hall piles, pictured below. 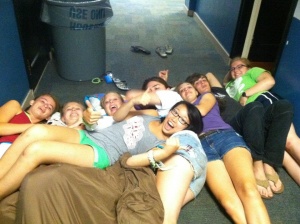