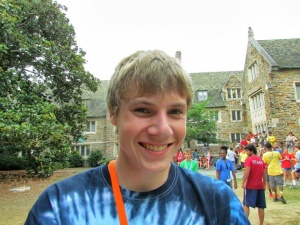 Jacob was an extraordinary frisbee player. It was a combination of his height (6'2), speed, throwing, catching, and dedication to the sport that made him so good. Before he came to camp he custom ordered 20 custom frisbees that said TiPNation on them. He took a picture with the frisbees and arranged them to spell out "TiP" with the Duke TiP Legendary Discas the dot on the 'I', which is now the cover photo for TipNation. He was selling them to other TiPsters until,sadly, it was banned. Along with the 21 TiP discs, he also brought a fair amount of his own. He played Frisbee in the quad, before classes, and during the break of his class. During break he would pass in the Frisbee circle, but occasionally he would pass the Frisbee back and forth with Hannah, who also had the same break area, super fast and without dropping it. Some of the tricks he sometimes did included 1. catching it behind his back 2. jumping and catching the disc between his legs 3. sitting down right before he caught the disc (not sure if he actually did this one during camp) 4. catching 2 discs at once (super hard). He had all the basic throws down and could throw them with ease and accuracy and because he was so tall he could jump super high and catch hard-to-reach discs or even completely reach over short people () to catch the Frisbee. All of these skills made him a very desirable player to have on your Ultimate Frisbee Team for Quadfest and the student/staff tournament. He was commonly referred to as something along the lines of "tall blonde frisbee kid" by people who didn't know his name. Although pretty much everyone knew Jacob. When teams started to be created for the Frisbee tournament, Jacob wasn't officially part of any team, yet both Team Can't Spell and Parth's RAG (never actually became a team) really wanted him to be on their team. Another TiPter, Hannah, also wanted to be on Jacob's team as they were good friends and liked passing together. She was also being asked to join both of those teams, but instead of that, she went to Jacob, and together, they started drafting Dream Team. They then they're complete team, which of course changed a few times due to various players switching to the other teams. During the actual student staff tournament, Jacob was a crucial player especially due to his ability to easily out jump other student players, and majority of the staff. He then went on to win his first student-staff game in all 3 years of being a TiPster at West.

Jacob was on the blue team, and possibly even the captain of the team(He wasn't captain, but he should've been captain), too. The frisbee team had a fair amount of people who could play and girls that knew how to play. The other team that was Green Team, who had a lot of Dream Team's players + some people who had dropped out or who were good. They both beat they're opponent team, and then in the finals, they were to go against each other. When the actual game came, Green Team had a few players who didn't understand staying on their marks, leaving people like Jacob unguarded or guarded by someone a lot shorter, leaving him to score some points. In the end, Blue Team won (it was a close game, though) because of their good handlers, teamwork, speed, Jacob, and their girls that could actually play. Idk the rest of the events that Jacob competed in. 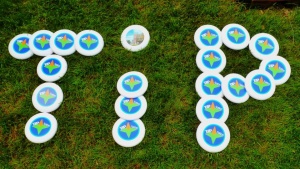 Jacob Thompson(also know as Jakabo, Yacob, the tree, or Joanna) was a first year TiPster in Engineering Problem Solving, a second year tipster in Robotics, and a third year in Electrical Engineering. He was amazing, had a hole in his shirt with a freckle directly under it, had ultra cool shoulder blades, almost lost to Amanda Taylor at left hand arm wrestling, sat on Tommy's face, and lands like a ballerina when he jumps. He likes to steal smoothies(even though they were someone's dinner.) He was also debatably the fastest tipster at Duke West 2012. HE'S ALSO KNOWN TO MAKE PEOPLE CRY WITH HIS FACEBOOK STATUSES Some of his nicknames include Jakabo, Yacob, the tree, and Joanna.