Not the same as Dream Team (Duke East)

Dream Team is the Ultimate Frisbee team that won the student tournament at Duke West Term 1 2013. The team was very diversified, having many 4th years (5 of them), some 3rd years, and even some second years. They were also very diverse in height, with heights ranging from 5'1 (Hannah) to 6'3 (Josh). The team then went on to beat the staff in the annual student vs. staff frisbee game, a first at West Term 1 in at least 3 years. They're unofficial team color was blue. The team was mainly organized by Hannah and Jacob. 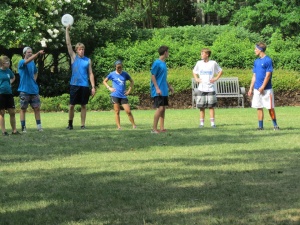 Dream Team vs. Kony's Pinecones (aka Team Can't Spell): 9-2 Win. The Dream Team scored within the first minute of play against this team. The Pinecones came in very cocky and had been trash talking Dream Team for days, and got a rude awakening. Dream Team had a huge height advantage, and launched many discs to their endzones for jumping catches by Wil, Danye, and Jacob. The whole team played great together, and it payed off.

The staff had a solid team, as always. This year they had Ty Aderhold, who plays on the Harvard Ultimate Frisbee team, and they had Yellow Shorts aka Sam who previously played on multiple national Ultimate teams. The starters for the Dream Team were Hannah, Odelia, Zac, Wil, Jacob, Danye, and Jackson. The staff started off strong, scoring 2 points before Dream Team could score at all. Then Dream team picked up their game, and kept the score within one or two points for a while. Both teams were told that halftime would be called whenever a team got to a score of 8. The score was 7-6, with Staff winning, before halftime, and then Dream Team scored two consecutive goals to pull ahead at halftime, with 8-7. Wil had multiple catches over the staff in the end zones, from long throws that flew the length of most of the field. Danye had some great end zone catches. Jacob and Hannah had a good assist in one of the games. (<-- More detail on who scored what and how would be cool)

During halftime, Dream Team was allowed to players out if they wished. They switched Jackson for Raymond, since they were of similar speed and size, switched Mary Clarke for Natalie, and (someone) for Max. These players would prove crucial for the second half of the game.

The game started back, with Students ahead, which was a great morale boost. The strategy for this half was to use short throws to get the disc halfway up the field, then give the disc to Raymond to launch to the end zone, and hope that the tall kids could catch it. This strategy worked quite well. The staff couldn't outjump Jacob and Wil, and they were tiring. Jacob caught two discs over Yellow Shorts, who started to get angry about it. The Dream Team didn't know how much longer they would be playing. The score was 10-8. At one point the staff stopped, looked at their watches, and said that since the students were up by 2 points, and it was time to go to dinner, that students won!! Dream Team was very happy. The crowd that had remained for the whole game was quiet, until some Dream Team members screamed out that they had won the game, then the crowd was slightly louder. Hannah started crying and laughing out of happiness, and the 4th years were extremely proud of finally beating the staff, which hadn't happened in all their years at West. All the sweaty TiPsters then went on to their glorious victory dinner, in the Great Hall. Final Score: Dream Team 10, Staff 8. The win was documented on the Duke TIP Legendary Disk.