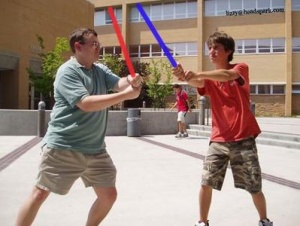 Photo Credit: L to the I to the double Z, Y.

John Mackey aka "Mackey." A long-term member of the TIP staff at the University of Kansas center for summer studies. John started off as a Math TA, assisting in Geometry, Algebra II, and eventually Writing. John designed the Comparative Mythology course, and was its first instructor.

During a friendly feud with infamous OSC John realized the capacity of his power, and was able to finally garner the respect of Ivan the Terrible. John released the WOM, or the Wrath Of Mackey, and Ivan was banished to the Chamber of Secrets...for five hours.

The most learned experts on Mackey differ greatly as to the nature of the WOM. Altough a definitive consensus has not been reached, most will agree that, "In some sense, metaphysically or otherwise, the WOM constitues an ineffible source of power, or at least an apparent aura of power through which the holder of the WOM will both metamorphosize (thereby undergoing metamorphosis) with respect to their primary social/societal actor status emerging into a higher status." (Brun. S. 2004. "Defining the WOM in Social and Ritualistic Contexts." Post-Modern Review Quarterly. 7-15.)

John's true TIP calling, however, was not realized until 2004, when, frustrated with the difficult task of affixing labels on rubrics, John created the LABEL tutorial. With the 2006 introduction of electronic rubrics, however, John found himself slighted, and everything, including the LABEL acronym, was lost in a tragic accident involving two TIP vans and the ice cream machine from Oliver Hall Dining Center.

Among some circles, John Mackey's evangelicalistic spreading of awesome led people to believe he is the second (or is it third now?) coming of Christ. However, science has disproved this theory in favor of reality; John Mackey IS God.

The Fate of Mackey

Mackey currently resides in his ivory palace which is located in an undisclosed location near the Sea of Japan. It is a fourteen-level pagoda, which is guarded by seven times fourteen (for more information see ) samurai guards, men who have sworn their lives to protect Mackey, their feudal liege. 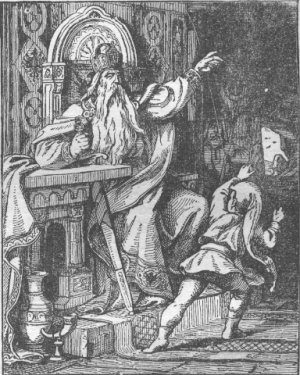 A contemporary artist's interpretative rendition of the Hall of Mackey.

When the WOM failed him in his final battle against his myth instructor successor, Kathy Piller, Mackey retired forever to his palace, never to be seen again. Rumors abound about how Mackey spends his days there, but it is generally agreed among scholars, as based on historical writings of Saint Antagosticles the Wretched, which were found in the aged tomes of the prophetess Vegoia, which had been hermetically sealed in a seven-fold cloth woven from spun gold and buried near the river Ganges, which Mackey himself had once drank from using a wicker basket blessed by the Buddha himself, that Mackey sits in the Siege Perilous at the head of a long table on the highest level of his palace. There he dwells in a half-awake, half-dream-like state, with his long white beard trailing under the table. He sends a servant every day to see if the ravens have stopped circling outside, for it is said that when the black birds have disappeared from view that Mackey may once again leave his palace and roam the world, bringing with him a golden age back to Duke TIP.