Karis' RAG in Term 1 2013 was one of the closest RAGs yet encountered. Affectionately referred to as "the Bees" or "the Oats," the girls of the second floor of Brown were undeniably awesome. Although, on check in day, many of them were nervous to have Karis as their RC (they had heard she could be mean), they were greatly relieved when their nightly RAG meetings often included Karis' famous question ball (she was very, very proud of this). The adventures continued with several spoken word readings of Nicky Minaj and conversations in other languages. Throughout the term, RAG members would update the whiteboard on Karis' door (which was in the middle of the hall) with hashtags of what was currently trending among them (examples include #savekaris, #marshaleejones, and #thepumpdepump). Other pastimes of the RAG included apples to apples or catch phrase sessions in Lucy and Charlotte's corner/triple room (only two people though, so there was lots of extra space) along with talking in funny accents (this was mainly Lauren and Ariel as the rest of the RAG was not as talented as they were). 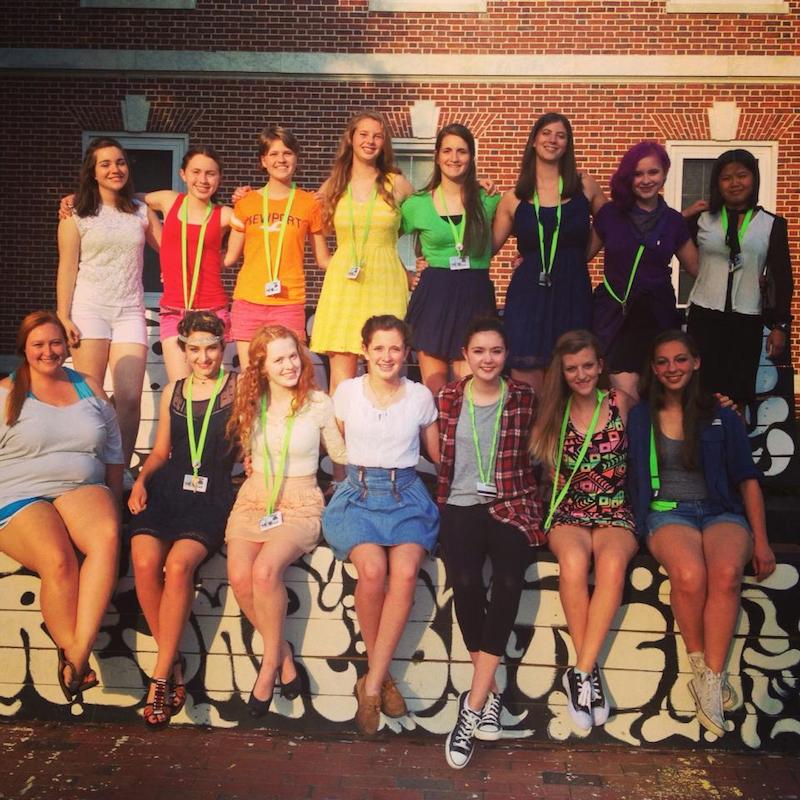 According to the termbook, she is most likely to burst into song. Ariel could frequently be found serenading people (usually Emma, by request) with songs like "Hello" from Book of Mormon, "Gay or European?" from Legally Blonde: The Musical, and "Popular" from Wicked. She had a whiteboard in her room, which had names on it. Emma assumed it was a hit list, but it turned out that Ariel just woke people up so they could do their laundry. Ariel's room was very home-like, with lots of furniture. She had a Star Trek poster, because she had been to an early viewing of it. She also very kindly lent Emma her "pale people makeup" for dances. At the end of term, Ariel received the wings.

2014 Duke East Term 1 The Enlightenment and Its Critics

According to the termbook, she is most likely to marry Benedict Cumberbatch. She and her roommate Syd, along with Ariel, enjoyed watching the unaired Sherlock pilot. Cassie, like her Snapchat username, rulz. She's confident and awesome, and makes everybody like her because she's so chill. Cassia is a prominent member of basically every fandom ever (Superwholock - which is three duh, Harry Potter, John Green, Hannibal, and others too numerous to list) and can school you anytime on all of them. She's sarcastic, witty, and awesome to be around, but of course also nice, because it's built-in. Cassie is also an awesome ballet dancer, even though us TiPsters never got to see her in action, and enjoyed the TiPstar Zumba activity in 2014's term. Cassia is a devoted photographer and, in 2014, broke the official TiP record for number of pictures taken during a single term. (Well, not anything official, but the previous record was understood to have been held by Caitlin Cafiero, and Cassia doubled that with around 1,500 pictures.) Cassia is a devoted TiPster and enjoys mocking, reminiscing, and taking part in TiP activities.

According to the termbook, she is most likely to bring IKEA to TiP. Charlotte was also a morning runner (with Isabelle and Maya), and she was super-fast, deciding that running quickly would make up for not running long distances. Apparently it worked, because her school team became state champions!

According to the termbook, she is most likely to get dragged out of bed.

2014 Duke East Term 1 The Enlightenment and Its Critics

According to the termbook, she is most likely to dance alone in the closet.

According to the termbook, she is most likely to have a green card. Emma is someone who lives, breathes, and loves TiP more than most of everybody. Emma is one of the first people you see at TiP, because she's one of the first people to arrive. Emma is a tad bit crazy, but it's all incredibly well-intentioned, like her organization of Sunny's birthday party the first day of 4th year. (Her calling is to be a wedding planner.) Emma is one of the nicest people ever, and she's very welcoming of newcomers to TiP. Emma is very fashion-conscious, and brings to TiP an incredible wardrobe, which she will frequently ask advice about. She also enjoys the process of straightening her hair, or at least enjoys the effects of it, as it takes forever. Emma knows pretty much everything there is to know about TiP, and truly shines during the dances, where she impresses everybody with her knowledge of tradition songs and the Dougie. She is the most in-touch-with-the-outside-world TiPster there is, because she frequently receives letters from a bunch of people during term, as well as sends letters during the rest of the year.

According to the termbook, she is most likely to fangirl over tofu. Isabelle is one of the nicest people ever, and would frequently be seen knitting little hats for babies at her local hospital. She used up 3 whole spools of yarn over term, and had to be mailed some. Showing more friendship, Isabelle also found a way to microwave regular cake batter (TiP lacks ovens) and gave a cake to Maya and Charlotte on their respective birthdays during term. Isabelle could frequently be seen running in the mornings (she's in cross country at her school)and frequently proclaiming her love of Nalgene water bottles (hers was decorated with multiple stickers). Isabelle was also in a relationtip with Kurt Warren, a 4th year (in 2013). Knowing her love of carrot cake from the Mad Hatter bakery on 9th Street, Kurt got her not just a slice, but an ENTIRE CAKE one day, showing his love and devotion. Isabelle kindly shared this delicacy with her RAG. Isabelle also frequently ate the Marketplace out of tofu.

According to the termbook, she is most likely to collage.

According to the termbook, she is most likely to breakup with you and crab walk away. At the end of term, she received the stilettos., because Lauren is one of the most TiPpy people you could ever meet. Lauren is a great person all around, friendly, funny, smart, and awesome. She was a great director for the 2014 Talent Show, making the 4th years very proud, and her devotion to TiP is an inspiration to all. Lauren has had: a full-head mask that she made at TiP 2nd year and passed on in 2014, a Pegram shirt that she designed and made after 2nd year (lived in Pegram), a piece of the tunnel wall that she spray-painted, a watch whose band was made from her 3rd year lanyard, and probably meny more TiPpy items that I forget. Lauren was also in a couple relationTiPs, during 2nd and 3rd year. Her first kiss ever was to Nico during 2nd year, but she entered into a true relationTiP with someone else. During 3rd year, Lauren and Dylan Quintal was the best couple (official relationTiP) on campus, and they remain great friends who complement and compliment each other perfectly. (I shipped it again 4th year, but Lauren had a real boyfriend at home.) Being a good person, Lauren refrained from romance at TiP in 2014, though she admitted that she would go for a guy had she not had a boyfriend.

According to the termbook, she is most likely to adopt you. Lucy is another marvelous person (really, everybody in this RAG is, but I need a way to start these bios), the soul mate of fellow Karis RAG-mate Taylor Lawing. Lucy and Taylor, because you can never have one without the other, were and are undoubtedly to biggest fans of Karis that could ever be. Aside from taking a daily selfie with her during 4th year, they would frequently be found not in Bassett, but in Alspaugh, by Karis' room, keeping her company.

According to the termbook, she is most likely to draw a tattoo in Nutella. Maria is a kind of quiet but extremely nice TiPster, who immediately became recognized by the community at large for her impressive "tattoos" (drawing on herself with markers, Nutella, henna body paint, and probably other stuff) that often would take up a majority of a limb. She also returned to TiP with shorter and bluer hair than before, which she rocked by wearing it in various complicated hairdos. Maria took Philosophy of Time during 4th year and wrote a tear-inspiring poem that she performed at the Talent Show about what it's like to be a 4th year and not returning. It was really sad, but really good. Maria also formed a relationTiP during 4th year with a 3rd year named Jackson (who was not in her class, btw). But everybody knows that they were a thing. They were really sweet together.

According to the termbook, she is most likely to play awesome Frisbee.

According to the termbook, she is most likely to win a nightgown fashion contest. Syd(ney) Clark is a pink-haired ball of awesome nerdiness. (Nerdiness, at nerd camp, is of course a good thing.) Syd is known for her extensive knowledge of Star Trek specifically, but also Sherlock (watched the unaired pilot with roommate Cassie during term), an effect of being cool. Syd was constantly grilled about the homeschool life, but a perk of that was her ability to play a bazillion different types of card games. Syd, along with Maya, was a member of the Trivia Night team "The Double Xs" (a reference to the two X chromosomes that females have, because there were no guys on the team), who may not have won but were nonetheless awesome.

According to the termbook, she is most likely to meet the Tehrget Lady.

Maya, living in the same city as Lucy and Syd, encountered each of them once unexpectedly in the year between 3rd and 4th year. Lucy gained an incredible amount of respect for coincidentally wearing the Karis' RAG shirt the day of the encounter.

In August 2013, Emma and Elisa reunited and went shopping.

In September 2013, Emma visited Ariel and they went to a concert together. It was wonderful.

In February 2014, Lauren and Isabelle reunited at a swim meet.

In June of 2014, Lucy visited Emma's house before and after term, which resulted (per usual) in some interest Facebook photos and posts.

In July of 2014, 3 weeks after the end of 4th year, Taylor happened to drop by Charleston, SC, where everybody knows Ariel lives. They spent an undisclosed amount of time together, at the beach, and probably other places but idk. Happy selfies were posted in the Duke TiP East Term I Facebook group.

In August 2014, Karis and Taylor reunited.

In December of 2015, Karis visited Emma and they had lunch together, which was amazing.

In June of 2016, Ariel visited Emma for her graduation.

In March 2017, Lucy and Isabelle ran into each other at swing dance.

In April 2017, Emma and Cassi had lunch when Emma visited her at college. On this same trip, Emma got pastries with Charlotte.