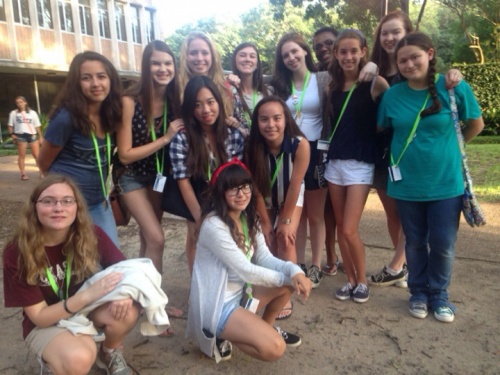 In the 2nd term of TiP at Rice University during 2014, Mary's Dairy was comprised of:

The group of third year girls lived on the third floor of Brown and became extremely close with each other, often attempting to group themselves into the same evening activities. In fact, the name "Mary's Dairy" originated during evening activities one night when many members of Mary's RC Group were bored. First, the group named themselves after non-alcoholic beverages, dubbing themselves, "The Virgin Marys." Although, after a negative response from their RC, Mary, and an overly positive response from a second year boy, they decided to re-name themselves after various dairy products.

Their first bonding occurred while playing Andi's Cards Against Humanity game, which was subsequently stolen on the last night. Some of their favorite pastimes included all getting ready for dances in the same room, button-making, attempting (and failing) to have sleepovers, and obsessing over boys (especially potential baes for Alyssa). They chose to go to the Galleria for their off-campus excursion, which was a disaster after Harper navigated them into a bad part of town that was at least 25 minutes from their destination. However, they did share great memories off their other movie RC nights when they laughed, watched, and made buttons.

During Roll Call, the group performed 'You Can't Stop the Beat,' from the musical Hairspray. While the group didn't win, they thoroughly enjoyed impersonating a relationtip broken apart by the no PDA rule. Erin, a talented dancer, choreographed the piece.

Aside from Maddie's Chinese expletives, the group shared many jokes. These included "BAAAWLZ", which originated during the Texas snowball fight, "assert yourself, Mary," which alluded to their RC's shy tendencies, and "Texas Pride," which represented non-Texans' strange view on their counterparts' lone-star obsession. Jake, a strange - but beloved second year, often left them snacks, beckoning them to his room. His most famous and often repeated quote is, "If you want me or my fruit rollups, hit me up in room 710.

While the group has remained close over GroupMe and Instagram, they hope to be reunited during the 2015 TiP season.