Miss TIP is a pageant conducted at Quadfest after all entrances and songs have been completed. Guys dress up as girls, wear makeup, learn to walk, and must prepare a story so that they can answer the question to the best of their ability. Each contestant is called up one by one and is asked to give their name, and to answer a question which is only revealed at the pageant, not before. A winner is chosen by a group of RCs, and earns 80 points (i think???????) for their team

At East II 2010, Sam Callahan won the Miss TIP pageant. Emma Starr, Kathryn Ehlers, Lindsey Schumacher (sp?), Saara Hassoun, Jackie Keaton, Madison Blake, and many , many others helped Sam complete this honorable task. His question was "What would be your ideal date?" He was well prepared, and had an Edward Cullen on hand to help out. (Jon Jameson) ALSPAUGH *WON* QUADFEST! 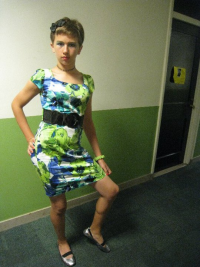 Sam dressed up for the Miss TIP Pageant. His win was one of the many reasons Alspaugh dominated Quadfest at East II 2010

At East II 2011, Sam Callahan won Miss TIP again. Many girls on second floor of Brown helped prepare him by shaving his legs, curling his wig, and doing his make-up, and Kathryn Ehlers was Sam's escort. When Sam was asked "What is your ideal date" he replied with "Going to California to ride the California horses. Then we would eat spaghetti like in Lady and the Tramp". During Sam's (or Samantha's) strut, he lost his wig. However, he was not fazed, and proceeded to put it on his head. He later threw it into the audience.

East II 2013 was won by Clayton Delp, who cemented his victory by "accidentally" dropping is lanyard during the runway walk and picking it up with a bend and snap. The judges also appreciated his talent, the ability to fit his entire fist in his mouth. All were disturbed, but who cares cause Brown got the win. The second runner up, Sam Feldman, was cheated out of a victory; with his flowing blonde wig, [almost] perfectly shaved legs, and super feminist responses, he totally should have won. In 2019 this old tradition was brought back to east term I. Instead of being held diring quadfest it was held on Where a skirt/what you want wednesday. The Miss Tip 2019 Pagent was a huge success with bits and peices of it going vrial on tiktok.